- December 20, 2010
Everyone knows the story of The Nativity, as one character in the film says go to any school in any town in any Christian area of the world during December and you can watch it. And yet when Daddy surprised me with an early Christmas gift of a DVD of Nativity I couldn't wait to watch it. We sat down last night and I even put down my ipod and didn't tweet once despite it being the sort of film that has perfect tweet one liners! 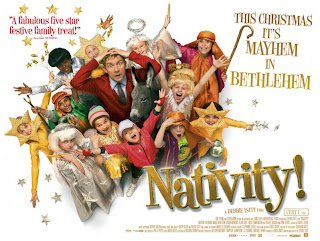 The plot is that Paul Maddens (Martin Freeman) is an actor who trained as a Primary Teacher after not making it big. His ex-girlfriend Jennifer (Ashley Jensen) went to Hollywood and became a hot shot producer and the other friend Gordon Shakespeare (Jason Watkins) became a teacher at another posh and private local school. Paul now hates Christmas because of an event that took place one Christmas Eve with Jennifer and because a Nativity he directed at his school was given minus two stars by a local papers critic (Alan Carr). He has become, well a bit bitter but the kids still sort of love him and they adore the new teaching assistant Mr Poppy (Marc Wooton). In an attempt to make himself sound a bit better about what he is doing he tells Shakespeare that Hollywood (eg Jennifer and her co-workers) are coming to watch the Nativity and make a film. And a book.

The word gets out and suddenly the entire town is excited for Hollywood coming to see the Nativity and Mr Poppy comes up with ideas like a Death Slide, complicated dance moves, multiple costume changes, lights, music and a smoke machine. Oh and Wires for the Angels. Talking of which the Angel Gabriel was the star of the show for me... and not just because he reminded me of The Cat from Red Dwarf. 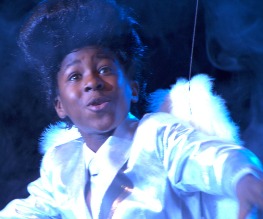 Nativity is a classic Christmas Feel Good Film, that I will watch again with Top Ender (and probably again on my own every night this week). I did actually cry at two points in the film as I was really touched by what was happening and to say the songs aren't catchy would be like saying it's not Christmas Day this coming Saturday. Daddy and I have already sung along to the end credits and as Daddy went to bed he was humming a little of the opening number!

The film is amazing and I really don't know why I missed it last Christmas at the Cinema. It deserves a much wider audience and if you can get out of the house today (We can just about walk up the road through the snow) then I would suggest that you go and buy it. The RRP is £19.99 for the DVD (£24.99 for Blu-ray) but a quick google found it for £10.99 in most stores!

Oh and as a tall smiley blonde child, with a big mouth voice I was always cast as the Angel Gabriel... just in case you were wondering.
Film