- December 07, 2010
Earlier this year when I became a Huggies Mum I knew that my days as a Huggies Mum were numbered. Baby Boy was really already aware of when he was going to the toilet and what he was doing in his nappy and I knew that it was only a matter of time before I took the jump and potty trained him. A Mum to a potty trained Baby Boy isn't in much need of a Huggies sponsorship! So I was the first Mummy to graduate from the Huggies team earlier this year in a very posh hotel. The very posh hotel was The Dorchester in London, where I and the other Huggies Mum's were going for afternoon tea with the lovely ladies of Huggies. I knew that I was graduating but had said to keep it a secret from the other Huggies Mum's so it would be a nice surprise for them. 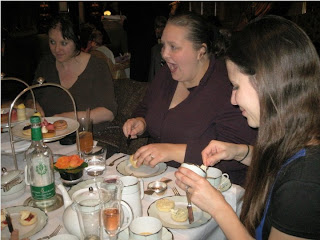 The sandwiches at The Dorchester were simply amazing. Honestly, the breads that they used (there were three different kinds from what I could tell) were some of the tastiest breads I had ever tasted. The fillings were just as fantastic and even though they were just sandwiches I think that having them cut into rather elegant fingers made them even tastier. Did I mention that the sandwiches were tasty? Of course I don't drink tea (being LDS), and so I was given a rather lovely fruit mocktail to drink made just for me by the very lovely waiter. The very lovely waiter seemed a little exasperated with me that I went to an Afternoon Tea and yet didn't drink tea or champagne (which was also being offered) and also that I could make my mind up about which sandwiches I wanted. Did I mention that the sandwiches were really lovely?

We followed the Sandwiches up with some very lovely cakes, which even had bits of Gold leaf on them and all the while chatted and caught up with each other, shared each others news and as is normal when you get a bunch of blogging Mums together about our blogs, stats and odd search terms used to find our blogs.

Then came the moment that I was waiting for. My graduation. 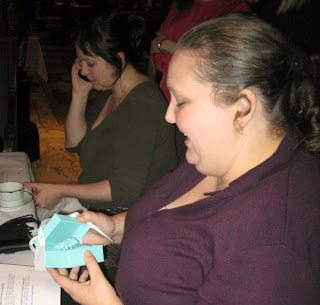 Of course just because I have graduated from the Huggies Mummy Team, it doesn't mean that the programme is going to end as the other Mummies graduate. Instead as each Mum graduates, a new Mum will join the group and so the Huggies Mum's will live on! At my Graduaction the lovely Huggies ladies presented me with a little blue box. The little blue box said Tiffanys on it. There are only three things I like more than little blue boxes that say Tiffanys on them and that is my family, the Dorchester Sandwiches and Dr Pepper. Opening up the box I found the cutest Tiffany & Co Mum Heart Tag Charm in it, its ready for whatever I want it to be added to I can add it to a Necklace or to my Charm Bracelet and it is already something really important to me. It marks my time as a Huggies Mum and as a Mum of a child in nappies. 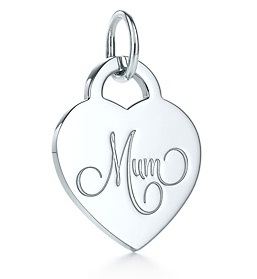 I would just like to say Thanks to Huggies for the amazing times that I have had with them for introducing me to some fantastic Mummy Bloggers (and two of my very best friends Vic and Emma) and for the support that they have given me and of course the nappies!
Family Life