A Trip to the Cinema

- December 28, 2010
Daddy and Top Ender have always had Daddy Daughter Date Nights and Top Ender and I have traditionally had Mummy Daughter Date Mornings. It started when we needed to be out of the house on a Saturday morning so that Daddy could sleep (he would work all night on a Friday) and the one thing that I knew that was within our budget and would keep us out of the cold was going to the cinema (It was in our budget because the Movies for Juniors at the weekend are £1 per person) for a couple of hours. Top Ender and I loved sitting in the dark together holding hands in the "mild peril" sections of the film, eating popcorn and chocolate stars, laughing at the funny bits, waiting until the very last name on the credits rolled past before we got out of our seats and then discussing the film and our favourite parts all the way home. When Baby Boy was born we went a few times, but we soon stopped going because we had other things to do and our already tight budget was even tighter. Also Baby Boy wasn't that impressed with watching a film in the semi-dark... 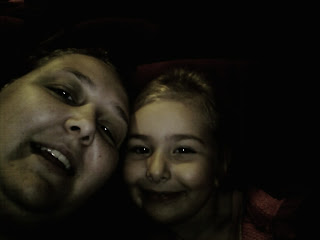 A few weeks back Daddy was doing his usual trawl of the Internet and he asked if I might like to go with Top Ender to see a sing-a-long version of Grease and Mamma Mia at the one of the local Cinemas. I agreed that it would be great, two of our favourite films, time together just Top Ender and me and for free thanks to Diet Coke. The first film that we saw was Mamma Mia. I didn't tell Top Ender what it was that we were going to see and even managed to get the Usher to keep quiet about what film it was. We sat down in a half empty auditorium with our treats of popcorn and chocolate and waited for the film to start, making jokes about what was going on and what we were about to watch. Top Ender was so happy to see the film on the big screen (we have only ever watched it on our TV) and to have spent some one on one time with me too. 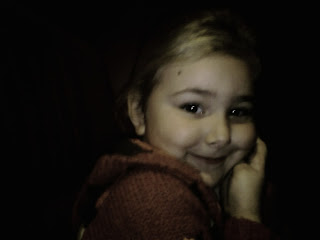 Two weeks later and we were back at the cinema. A different screen this time and a cheeky usher who told me that the sing-a-long had been cancelled. I nearly clocked him one before I realised that he was joking! Seeing Grease in the cinema was a treat for me as much as it was for Top Ender. I used to watch the film on what seemed a weekly basis (it was probably daily!) with my two youngest Aunties (Hi Aunty T and Aunty C!) and as such knew all the words to the songs, dance moves, dialogue, trivia, actors names and anything else you would care to mention. Top Ender and I adored the Sing-a-long version and have plans to watch a few other films (on our home projector) and sing loudly to them! If anyone else wants to pop round to join in just let us know!
Date Night Film Review