- July 22, 2011
We like making things in our house, it doesn't matter if it is a mess or a tower or dinner or things out of toilet rolls we just like spending time together making things! A few days ago Big Boy and I were a little bored and so we decided to make something out of toilet rolls (we have plenty of them around) and as we grabbed four of them we decided that we wanted to play bartender and we made glasses of juice. 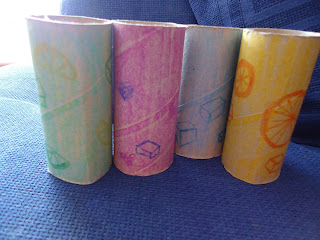 I'm not claiming to be the worlds best artist (It's okay I know I'm not) but I was pleased with the way that they came out as we knew what they were supposed to be. Just in case you don't know from left to right we have a glass of Lemon and Lime (see the lemon and lime wedges there are ice cubes too but I don't think you can see them), Raspberry and Blackcurrant (with Ice), Water (again with the ice) and Orange (See the orange and the ice?!).

Big Boy and I were quite pleased with our efforts and played for ages selling drinks to each other, testing them to see what they tasted like and lining them up on the sofa. We were so impressed with them that when we collected Top Ender from school we even made her play bartender with us when she got home and again the same with Daddy when he got home from work!

Then this week we decided that we were bored of pretending to be bar tenders. What should we make with our glut of toilet rolls though? Then Big Boy came up with a great idea, a toilet roll version of us! 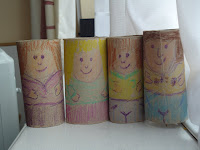 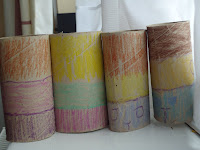 I apologise for the slightly bent versions of us, but we played with them before I thought to take a picture and "Daddy" got a bit squashed and I'm also not sure why he is jumping in the air in those pictures either! Maybe he thinks he is a Ribena berry. The toilet roll A Mothers Ramblings team got a little adventurous and started practising their gymnastics... 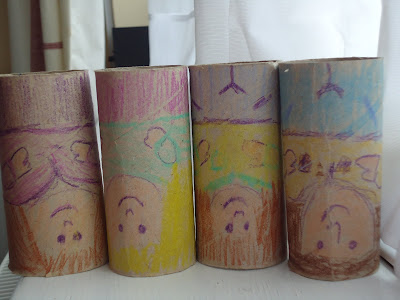 I have a feeling that they are going to get worse... 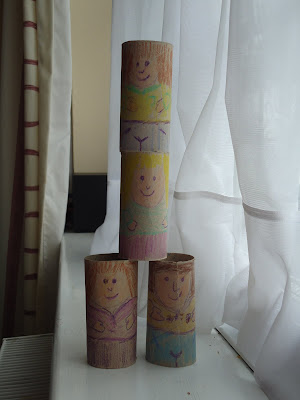 See a pyramid. I knew it.

I just hope that they don't discover they can be posted around the country or they might end up turning up on other peoples blogs!
Craft