Top Ender Giggles - The knee bone is connected to the...

- July 12, 2011
On Saturday night, the Foo Fighters concert taking place at Milton Keynes Bowl could be heard at our house, which is around three miles away. As is normal for us we lay on our bed in the dark with the windows open for a few minutes each time there is a concert to see if we can "hear" what the performers are saying or singing. Top Ender had joined us (as she was awake) and had come back from the bathroom and laid down between us when Daddy said;

"If you had been here a minute ago you would have had a dead spider thrown on you!"
Top Ender looked horrified, so we explained that a few moments after she had left to go to the bathroom Daddy had suddenly started batting at his bare chest and sat upright in the bed and began using his phone (that he had been tweeting on) as a torch over the duvet. There on the bed was a now dead spider that had dropped on to his chest in the dark. 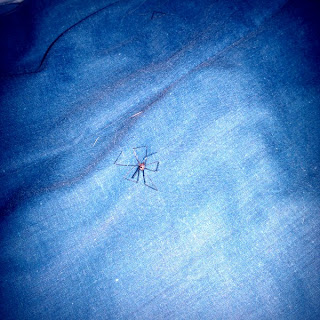 "I wonder what else the spider has left behind"
"Smithereens?" offered Top Ender
"Smithereens isn't a part, it's a description of how many pieces the spider was in!" laughed Daddy
"Oh!" said a giggling Top Ender
Funny