- November 10, 2011
We received a copy of the Barbie A Perfect Christmas Film.

We love Christmas here at A Mothers Ramblings, we will happily watch Christmas films all year round and come the start of November you will find us watching a Christmas film as a family every weekend and then we really step it up in December with a Christmas film every single day. Top Ender informed me a few weeks back that there was going to be a Barbie Christmas film out soon and I made a mental note to make sure that Saint Nicholas added it to her clean shoes during Advent. Then by a perfect chance we were sent the film to review. 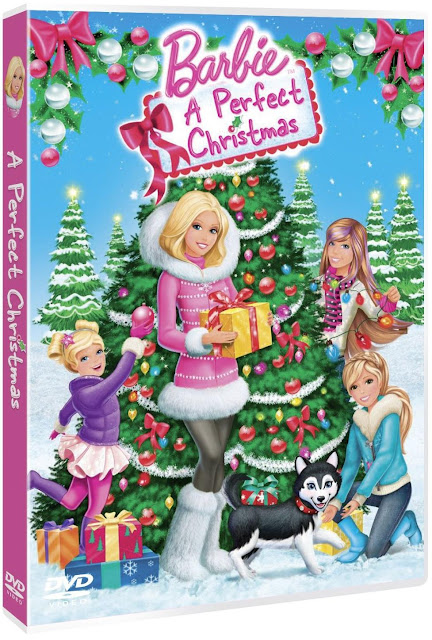 Barbie stars with her sisters, Skipper, Stacie and Chelsea in a seasonal musical where they discover that the perfect Christmas isn't necessarily about going to see a show, or a concert or going ice skating but being together and having some good old family fun. The sisters are on their way to New York, to do the things that they have planned but when a snowstorm forces their travel plans to change they end up staying in an inn in a tiny village called Tannenbaum where the girls think they may have discovered Santa's workshop... only problem being they are in Minnesota!

Top Ender and Big Boy loved the film and sat happily the whole way through on the sofa. We all agreed that this was a great Barbie movie and it was great to see Skipper in a film (I think this might be her first time but I'm not sure). The songs are very catchy and I have been humming a couple of them since we watched the film and if you watch the trailer below you will be too. It's a great film to watch as a family as it will remind you that Christmas is a good time to spend together having fun (which as you know is what we are all about here at A Mothers Ramblings!).

The film has a U certificate and has an RRP of £14.99 and includes out takes, a music video and a sneak peek at the new Barbie film for Spring A Mermaid's Tale 2 and this film is a must for any Barbie fan's Christmas stocking!
Film