- November 03, 2011
This past weekend we were due to go to Drayton Manor, to watch the firework display and to have another go on the Ben 10 ride! but Top Ender was quite poorly and so we had to cancel at the last minute. We thought it best to break the news to Big Boy gently and so Daddy took him to one side and explained that Top Ender couldn't go to Drayton Manor because she was poorly and had to stay in bed. Not to be put off Big Boy thought for a moment and then told Daddy;

"You can take me!"
"Well, I don't really feel very well either" coughed Daddy

"I have to go on my own?!" said an unbelieving Big Boy

I think to make it up to him we are going to have to go up for the Drayton's Magical Christmas which runs from November 26th to January 2nd, but only because it snows three times a day and Santa will be there! I just hope that Big Boy forgives us for not having gone last weekend. 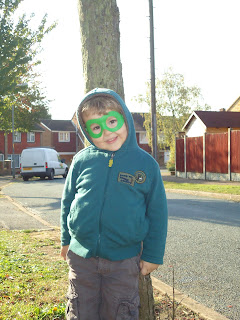