Phineas and Ferb: Across the Second Dimension Wii Game review

- November 03, 2011
We love the Disney's cartoon series Phineas and Ferb here at A Mothers Ramblings, like us the brothers want to live everyday to the fullest all in their pursuit to have fun. This year saw the first Disney Channel Original Movie of Phineas and Ferb's adventures titled Phineas and Ferb: Across the Second Dimension and this has inspired a new game (available for the Wii, PS3 and DS) where you can play as one of eight characters (including Phineas, Ferb and Agent P!) and when I pulled it out of the padded envelope for Top Ender and Big Boy to play one afternoon I don't think we realised just how much we were going to enjoy it. 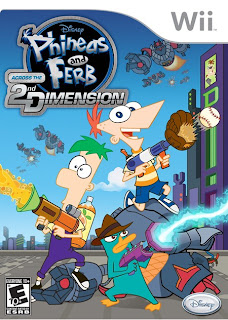 The game is great for us as it can be a two player game, which means that Top Ender can play and Big Boy can feel that he is helping out too and join in when he can. As each character that you play has special combat moves and a different gadget to use it's great fun working out how to use the characters to your best advantage and rather like the cartoon teaches children that it is working together that makes everything fun and that harmonious siblings normally results in pie at the end of the day!

I of course haven't played the 24 levels on my own when the children have gone to bed, so that I can battle the Dr Doofenshmirtz from the other Dimension in to submission because I love the inept Doof from this dimension and anyone who says I have been is lying...

The game is available now and is published by Disney Interactive Studios and was developed by High Impact Games. It has a PEGI rating of 7 and although Big Boy is younger than that he is a fan of the show and so loves the game as does Top Ender! This is a great fun game for the family to play especially for fans of Phineas and Ferb, although I don't think it matters if you haven't ever seen the show before because you can still enjoy the game play.
Wii Game review