- November 26, 2011
When someone calls me a genius I take the compliment (even if it wasn't intended as such) and run. This week however I have explained a Christmas Tradition of the A Mothers Ramblings House to a few different people and each time I have explained this tradition the person I am explaining it to has sincerely called me a Genius and I've stuck around so they can be nice to me a bit longer.

One of the traditions that I brought to the AMR household from my own family was everybody gets to play Santa when handing out presents from under the tree. One person would sit nearer the tree and would hunt out a present for everyone in the room. Everyone would open their gifts together, say Thank You, have a quick fiddle or sniff or whatever and then the next gift would be delivered to where they were sitting. Top Ender loved this, but when she was small and couldn't read she had to play Santa with someone who would pass her the gifts from under the tree and tell her who it was for.

I knew that there had to be a way around this, but I wasn't sure what and it was only when Big Boy was born that I realised what we should do. That year all the gifts under the tree for Top Ender and Big Boy were colour coded. 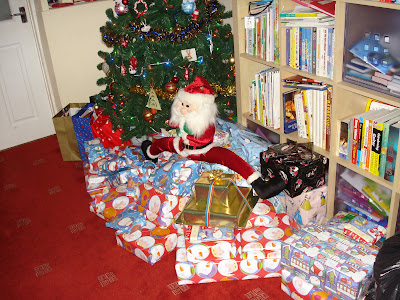 Since then I haven't bothered with tags for gifts for Daddy, Top Ender, Big Boy or I having a simple colour code method instead.

This year I found some great paper in Wilkinsons that fitted our needs perfectly. There was Green paper with white circles which I have used to wrap up Big Boy's gifts, Red paper with white circles which I have used to wrap up Top Ender's gifts. As my Mum is with us on Christmas Day I have even given her white paper with red dots. Daddy and I were going to share the stripy green, red and white paper that came in the pack and I was going to add different coloured ribbon so we could tell the difference between our gifts. Luckily before I had wrapped up any of our gifts I found a similar Red, Green and White stripy Paper in Sainsbury's, the only difference being that the Sainsbury's paper had Snowflakes on! It was decided that I would get the snowflakes paper and so there are lots of colour coded wrapped gifts hidden away here. 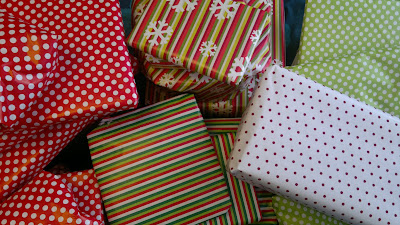 So what do you think of this simple method of wrapping gifts? Is colour coding paper to different people in your home on Christmas Day something you might consider doing? Do you think it would help young children who can't read, those who can't read without their glasses on or even an Uncle who has had slightly too much to drink? Let me know in the comments and remember I like to be called a Genius!
Christmas