- November 20, 2011
We were sent several packs of the Sakata Rice Crackers to try. I ate them all.

One of the first things that people always say to me on discovering I am a Celiac is "Oh, you must miss..." followed by the name of a delicious food that contains Wheat. In fact, since starting to avoid certain foods, I have in fact found the range of things that I eat has increased - having to think intelligently about meals and snacks has meant I am now choosing foods that I would never probably have eaten before. Meanwhile myself, Mummy and even the kids are now quite adept at recognising the sorts of food that contain wheat - and between us we can read allergy labels in about 10miliseconds from a distance of 50 feet!

Main meals are normally fine - I have to avoid a fair amount of "ready-meals", but most home-cooked food is either naturally Wheat and Gluten free, or can be adapted to suit. However, I like my snacks too, whether it is during a break at work, or sat on the sofa in the evening watching a film.

Sakata rice crackers are made from "polished" rice. I had to Google that, but it just means that the outer husk and the inner bran layers are both removed, leaving your common "white rice". The white grains are crushed into "rice flour" which is combined with water and steam to make a dough. After being cooled, rolled flat and cut, the shapes are dried, and then roasted and flavoured. 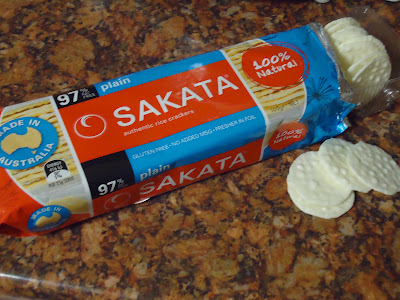 They are also made in...... Australia. Yeah, I didn't expect that part!

I received packets of the Plain, Cheddar, Classic BBQ and Sour Cream/Chive crackers to try, and found they were perfect for snacking! With the exception of the Plain crackers, which really didn't taste that nice at all, the others were lovely and I could easily find myself polishing off a packet in one go - so it's fortunate that they are virtually fat free.

They are great with dips or or their own, and you get a generous amount in each pack - I ate them all before I could count, but it's probably about 30-40 crackers in each pack. The family* also found them nice, which is always a plus - we try to eat the same things and at the same time, and for the family that means adapting to new flavours and recipes as much as me.

The good news is I don't have to travel "down under" to pick up more of the ones we did get sent (Plain, Cheddar, BBQ and Sour Cream), because you can buy them in Waitrose, for around £1.99 a pack (50p off coupon if you like the Facebook page though!). Apparently there are other flavours like Chicken (must try!), Greek Feta (curious...) and Seaweed (er, really?) available in Australia and so I hope that Waitrose will stock them soon.

*Note from Mummy: Actually by "Family" Daddy means him and the children, as I only got to eat one of the BBQ ones which I sneaked out of the open pack in the kitchen!
Food Gluten Free Snacks