- January 03, 2012
As has become tradition here in the UK on New Years Eve there were fireworks let off. As has also become tradition, some fool let several fireworks off earlier in the evening before we had a chance to get our three cats back in after their evening constitutional. If I am being kind I like to think that the fool was actually some local family pretending with their children that they had made it to Midnight and were ringing in the new year together, but knowing better I think it was a couple of people who had drunk just a little too much during the early evening and thought now was a good a time as any.

Willow (Top Ender's cat) was in the garden when the first of the evenings pyrotechnics lit up the sky and pretty quickly she shot through the cat flap, down the kitchen and scrambled up the front and over the top of my fridge to hide herself in the small gap behind the fridge. As she scrambled up the fridge she knocked several of my Bananagram tiles off the fridge rendering my New Years Eve themed Bananagrams puzzle incomprehensible and proving herself to be a lot smarter than the average cat... for when Daddy picked up the tiles he found they spelt out this; 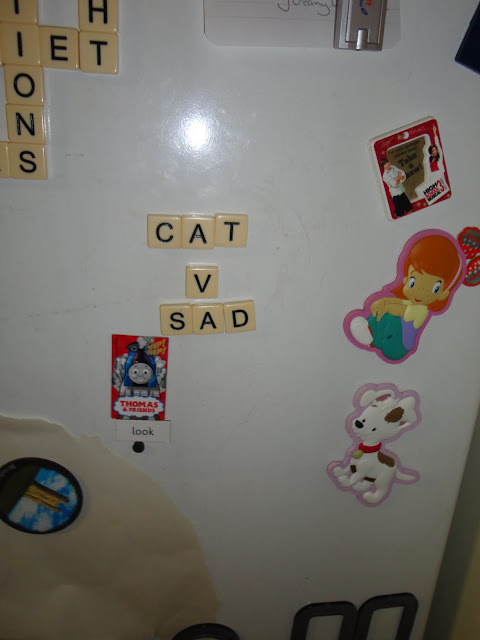 The Cat is a genius!

I did say back in 2011 (so long ago now) that I would put up a few Bananagram Challenges for those who are interested as Daddy, Top Ender and I loved playing the challenges together (Did I mention we won overall by the way? I know funky right?!) and we wanted to carry them on. So if you want to join in then this months challenge is "January" and it will close on the 31st of January. Just start with the word Bananagrams and go from there! There are no prizes for this, it's just a bit of fun.

I'll put up a linky if there is any interest, just let me know in the comments!
Toys