Helping your Children with social and emotional skills

- January 23, 2012
Before Daddy and I made the choice that Big Boy wasn't going to go to a Nursery before he started School we weighed up the pro's and cons of the situation. We knew that one of the hardest things for us to do wasn't helping him develop his reading skills or math skills or his creative skills but it was going to be helping him develop his social and emotional skills to the same level as his peers because he wasn't going to have as much interaction with people his age as he would if he went to a Nursery or playgroup. A lot of what I am talking about in the rest of this post comes from the research I made into the subject when Top Ender was small and Daddy and I wanted to help her to develop into a well rounded little girl... she is pretty well rounded so I think that they work!

I love paper plates for a variety of reasons and paper plates with drawn on emotions are great fun to play with. I sat at work one lunch time and drew as many faces as I could, there was happy, sad, angry, tired. ill, confused, worried, amused, and shy amongst others. The plates could be used as flash cards with the emotion having to be named before we moved on to the next one, they were used so that we too could pull the same face and we used them as springboards to talk about events that made us feel a certain emotion. We have found that these paper plates helped prepare for big events, and when our children have been unable to articulate how they are feeling they have been able to use the faces to show us what they can't say.

Being aware of different emotions is great, as it is part of having self awareness. Knowing that you are an individual, that you have feelings and needs is something which children learn in different stages and it is something which I feel children do need help with. For small babies playing with a mirror where they can see themselves and learn that it isn't another baby is the simplest step, but for toddlers it is harder as they identify themselves as part of a unit (and quite rightly too as they are part of a family). Having some responsibility for themselves (even if it is collecting their shoes) helps them to realise that they are a unit on their own too. 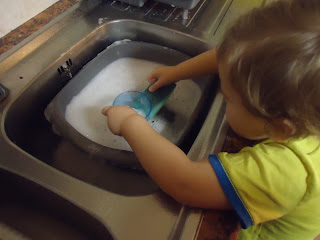 It's very hard to have empathy for others when you are small. You might know that another child is upset or angry because you recognise the emotions but being able to identify with other people and what they are feeling is something which takes great skill. I'm sure we all know some adults who still haven't mastered the skill! The best way I have found is by talking about feelings and sharing them, I tell Top Ender and Big Boy when I am upset and why if it is relevant. They know when I am angry and I explain why and I expect them to to the same too and I am often heard asking them to "use their words" to let me know how they are feeling.

The talking about feelings leads nicely on to managing feelings. I expect it is true of all children that at times they can't contain the frustration or anger they are experiencing and will try to lash out as they feel instinctively that this will help them feel better. I find if the child can voice what they are feeling (or use the paper plates to show what they are feeling) and can explain what has happened to make them feel this that they are a step closer to managing these feelings.

All children love simple motivation, it might be a race to see who can get dressed the quickest or who can put the most toys away in a period of time and these are great as they help the child to understand that there is a "reward" and find that motivation is everywhere. Self motivation however is something that you can't teach and will just have to encourage! 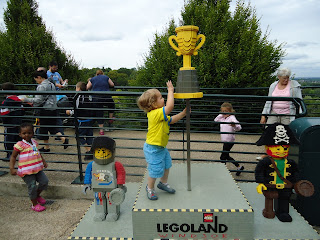 Social skills come under a lot of headers, for example understanding another person's feelings and trying to comfort them is a social skill as is talking to others, playing with others and just being around other people. Whilst we decided not to take Big Boy to a Nursery or play school, we haven't denied him the chance to socialise and interact with other children around his age taking him to plenty of parks, story sessions and activity groups. Whilst you can't force a child to interact with others, being supportive and keeping taking them to the situations will allow them to feel comfortable and to interact freely.

Every child develops a sense of self-reliance and independence best when the adults in their lives give them the support and encouragement that they need. One to one interaction is key for children to realise that they can do things, it might be that you have several children and you give them each an individual chore and help each child one at a time. A praising word said at this time helps their confidence to sky-rocket and this leads to the independence we know they need in the world.

I have found that one of the best ways to allow my children to develop independence is to allow them to take on responsibility, but none to far ahead of what they are ready for. If this means that Big Boy goes to the fridge to pour a drink himself and then has to find a cloth to clean up a spill then so be it, it is only a little spilt juice not the end of the world. It is the giving of the permission that makes the child realise that you are there to support them, that they are able to take a little more control of their life and that they are growing up that is important.
School