- January 18, 2012
It's no secret that I love jacket potatoes, I make them in my slow cooker, in the oven, in the microwave and even on the BBQ. I will serve them with casserole or sausages or a salad or even fish and if I am ever feeling down then this is a great comfort food and served with butter and a bit of salt and pepper it cheers me right up. The only problem is for a truly great jacket potato you have to know that you are going to want it at least an hour in advance. Cooking it slowly in the oven or slow cooker or even on a BBQ is the only way to achieve that crispy skin whilst getting the soft fluffy middle.

McCain (yes the McCain of the Daddy or chips fame) asked me last week if they could send me a new product that has just been launched; Frozen Oven Baked Jacket Potatoes which are cooked from frozen and ready in about five minutes. I figured what the heck, I might as well try them!

Big Boy and I decided to have them for lunch. I took the potatoes out of the freezer, placed them on a microwave plate and then cooked them together for eight minutes. After waiting for two minutes I put one on another plate, cut the potato a little deeper, added some butter with a bit of pepper and served. 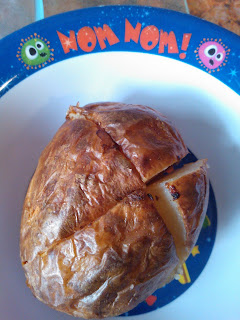 The inside was fluffy and soft and well cooked but the skin was microwaved potato skin, it was soft and not crispy. The potato had the colour of a oven baked jacket potato but I couldn't help feel disappointed, I mean what is the point in looking like a crispy potato if it isn't? I could create this myself by batch baking Jacket Potatoes and freezing them to microwave at a later date and it would probably cost as much for a 5kg bag of potatoes as it did for two McCain ones.

There are instructions for cooking the potatoes in the oven, but it takes around 45minutes and that is how long I do my potatoes after part baking them in the microwave first. I guess if you don't have an oven that these would be an acceptable alternative (My Sister didn't have an oven for over a year and I didn't whilst at University) but I'm sorry McCain I really really wanted to like these but I think that they need some more product development.

I was sent a frozen delivery of the McCain Jacket Potatoes which retail at £1.49 for a pack of two according to the pack I was sent but I believe they are £1.29 really (I got an early pack!) and it's £1.99 for a pack of four.
Food