- January 04, 2012
Over the last few months Top Ender and Big Boy have had a few Toys sent to be reviewed that for one reason or another I haven't got round to blogging about, but mentioned elsewhere. I thought it would be a good idea to blog about them though as others might find our observations useful!

These were great fun. They are small teddies that when you squeeze their Tummy emit a sound. These can then be squeezed  rhythmically to create a song. The problem is working out what song they are singing and how fast to squeeze the Sing-a-ma-jigs! These provided hours of entertainment and we have brought them as a gift for others because they were so much fun.


The Sing-a-ma-jigs live in BB's bedroom in his Teddy Tub and are frequently heard being squeezed to produce a song. I don't think that any of us are clever enough to start making our own music videos though.


When I first got married I had a toy alien that I could ask questions. It was the sort of thing that appealed to me and when we first saw Fijit it reminded us of that Alien. The original Alien had a few problems such as it only like lower toned voices (eg it would answer Daddy but not me) and sometimes it didn't understand what we said. We hoped that Fijit being aimed at children wouldn't have these issues, but it did. Tops very quickly lost interest in the Fijit because whatever she asked she got the wrong answer. Fijit would listen to me, but I didn't want to have to be the one to interact with the toy when it was for Tops. 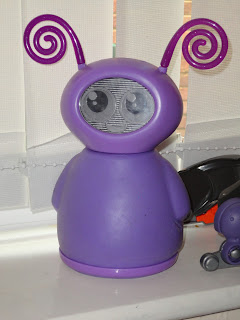 To top it all off, the Fijit was damaged in the post coming to us when the packaging split open and cut the Fijit's "flesh". Every time she moved some of her innards were exposed and with a curious Big Boy in the house this wasn't a good thing. Fijit now sits in the den on the windowsill watching all the other toys get played with.

The Lite Sprites arrived and we honestly thought that these were going to be something that only Top Ender would play with. Unsurprisingly though BB loved the colourful little dolls and the magical spinning tree. Tops and BB are often playing with the Lite Wand and collecting colours from different surfaces in the house and creating adventures where Bleak (the bad Sprite) is going to steal all the colours.


Big Boy loves to turn the Lite Sprites all green (his favourite colour) and Daddy and I have often been heard singing the tree's theme tune. These went down great and are a favourite to play with when Tops has friends round.

Big Boy really loved this Wii game and every time he saw it on TV or the characters on the displays in the local supermarkets he asked for us to play again. He is right to want to play the game, it is great fun and easy to play as it is explained as you go along what you have to do, the only downside is that Big Boy isn't able to play it on his own and needs an adults help. This would normally be fine but as soon as we turn the game on Top Ender wants to play and it's a two player game, so someone is disappointed. We love the back story and whilst this isn't the Spyro I remember from my youth it is fantastic for now!

I have been borrowing a friends sons figures so I can play the game when the children are in bed (they get them as rewards for good behaviour) and it is fun, I just wish that I could play it on my own all the time.

All of the toys above were sent to us to review.
Wii Game review