You Can Thank Me For The Lack Of Snow

- January 10, 2012
It's typical isn't it? Over the last eight years where I live, there has been snow in January (I know it's eight years because I was at home with a two week old baby and everyone was stuck where they were when the snow fell and that baby has just turned Eight). This year I wanted to be prepared and I brought Sledges and a snow shovel before Christmas so that the now traditional weather change wouldn't catch me out. I even have a new flask, thick socks and Snow boots that Hi-Tec sent me (The St. Moritz 200 in beige and cream) 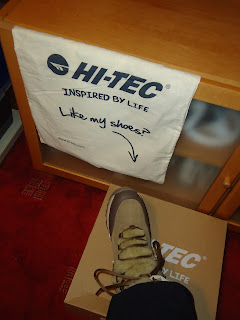 I've wore them to parents evening (Top Ender's Teacher approved of them). There was no snow.

I've worn them for a walk in the woods with the family. There was no snow.

I wore them on the beach and I was the only one who wasn't cold but still there was no snow.

I have even used them to hold down a huge piece of brown paper so I could draw the snow man that is now living in our Living Room window, but still there is no snow.

So if you haven't had snow this winter you can thank me and my new boots, my new shovel and my new sledges. I think I might buy a new umbrella and Wellies for Spring so it doesn't rain too much and I'm sure if I book a Summer Holiday to get away for some sun there will be a heat wave here in the UK...

Just in case it wasn't clear Hi-Tec sent me some boots, a flask and some socks.
Shoes Winter