- October 23, 2015
Last week Whitby Seafoods sent me a voucher to buy some of their lovely seafood products so that I could make a Spooky Supper for the Children and I. We decided to make ours ahead of Halloween so that you'd have a chance to make something similar for a meal for your family next week! 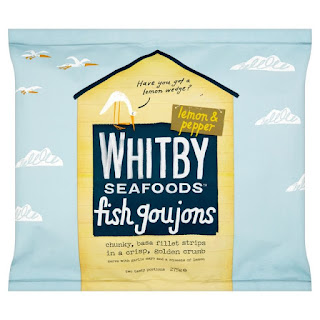 I present to you our take on the Spooky Supper! 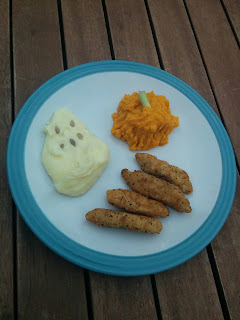 Big Boy and I had been talking on the way home from School, about what we could make to go with our Gnarled Witches Fingers aka Lemon and Pepper Fillet Goujons. 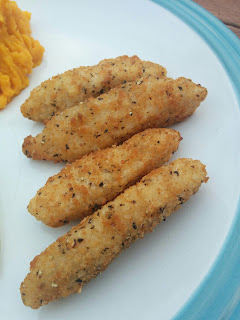 BB decided that I should dye Mash Potato, using either Food colouring or other Vegetables to create something like a pumpkin or a Witch's face (which would have to be green as all the best witches have green faces) as according to him, "that would just be totally awesome". I thought his idea was great, so along with the Gnarled Witches Fingers I made a Smashed Pumpkin and a Whipped Ghost!

The Smashed pumpkin, was just mashed carrots with a Spring Onion stalk. Big Boy thought this was brilliant and despite not wanting to eat his Spring Onion stalk, he and Top Ender loved the creativity and of course knew exactly what it was! 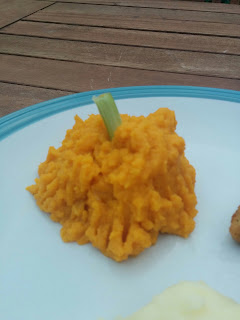 The Whipped Ghost, as you can probably tell is just mashed potato and I created the face using Sunflower Seeds as I accidentally dropped my tub of Pumpkin Seeds on the floor as I got them out the cupboard. Grrrrrrrrrrr! 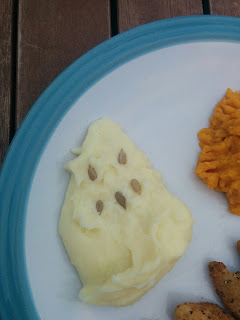 I know that what you'll really want to know, is what do the Lemon and Pepper Fillet Goujons taste like? Well, they are lovely. You can taste the lemon and the pepper but it isn't overwhelming and it isn't too subtle that you miss it. The Children didn't notice there was anything different about the goujons compared to the ones Daddy and I make (which are just seasoned with Salt and Pepper) on occasion.

The only quibble I had with them was the Carb information is per 100g cooked and when I'm trying to serve a meal quickly, I don't really want to be taking hot goujons out of the oven, weighing them and then putting them on a plate! Still, if that is my only complaint then I really don't have that many problems do I?!

Whitby Seafoods Lemon & Pepper Fish Goujons are available from all major supermarkets and are priced at £1.75 per 275g bag, however they are currently on offer at Tesco at £1.50 until March 2016.

We were sent a voucher to buy the Whitby Seafoods products. I felt a bit like I had a golden ticket as it was so big and fun looking! 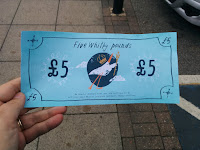