What We Are Eating This Week W/C 25th October

- October 24, 2015
I've been really naughty this week and haven't spent time working out what we are going to eat next week, well this week... in fact I even went to the Supermarket to do the Shopping before having written my shopping list! That for me is the most terrible thing I could do, it's a way to waste money and end up with nothing in the house worthy of eating... which is sort of what has happened!


I picked up some cheap Steak in Tesco for Daddy to have whilst I was out on Wednesday night (I was at Relief Society) and the Children ended up stealing half of it from his plate. We decided to have it again as a family, although Big Boy decided that Sausages were better for him than Steak.

We prefer to get the so called cheap steak in Tesco (the value range) as with our griddle and my secret seasoning trick (it's just Salt and Pepper, nothing secret really!) it makes it really lush and tasty and like you'd hope all Steak would be!


We've stopped having our Roast a week early as we're going to have the Stand and Stuff Tacos again today. Then we thought that actually what we really should have today is Toad in the Hole because you know it's YORKSHIRE PUDDING and SAUSAGES and everyone loves those two combined right?!


My Mum got me a Cauliflower Cheese to have from Tesco, I'm not sure why but I assume it was because she was buying something on offer and decided I'd like the free item! I decided however that we'd make use of this free meal by having it along with Pasta on Monday night.


We're supposed to be going out with my Mum today, which is a bummer because I wanted to have the Taco's today (also its Freedom Friday, but on a Tuesday!) but we normally eat with my Mum so I'm confused as to what to do. I figure that what'll we'll have to do is invite my Mum to eat the Taco's with us... that'll work right?!

Yeah, you're right my Mum isn't going to want Tacos so I'll pick something else. I have no idea what, I'll just let my Mum decide.


Today the Children and I have decided we're going to spend the day on the sofa. Well, after BB has had his flu "thingy". He hates it because it's a sniff thing and it makes his eyes water and makes him feel bad for the next couple of days. He figures that if he had the injection he wouldn't get the flu effects and plus he isn't scared of needles... 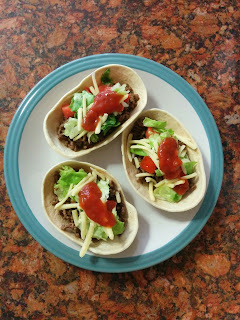 Either way, after our early morning appointment we'll head back home and watch as many films as we can manage, whilst eating popcorn, drinking Hot Chocolate and possibly some form of vegetables.


Big Boy and Top Ender both picked one meal each this week. Tops picked the Toad in the Hole and BB picked Spaghetti and eventually settled on having Meatballs too.

I saw a recipe this week where instead of using breadcrumbs the recipe used Oatmeal and this got me thinking because I don't use breadcrumbs or oatmeal when I'm making meatballs at home. All I add is a little onion, some herbs and depending if Daddy is eating with us or not an egg.

Top Ender and Daddy will eat Popcorn and whatever at the cinema and I'll give Tops a sandwich late afternoon/early evening to keep her going.

Anyway BB and I will get some treats. We're thinking all our favourite foods or whatever we have in the Fridge, Freezer and Cupboards!

So that's it for us. What are you eating this week?