- October 23, 2015
Bernard Matthews had a great idea, they thought that the Children might like to suggest some fun ideas for their School Lunchboxes using the Bernard Matthews Cooked Meats range as the protein and creating lunches that they would be excited to eat. Now my Children have been, up to a point, rather spoiled when it comes to lunches. As you may remember I like to make the Children's lunches look fun and interesting.

Other than telling me that they love the Bernard Matthew range of Turkey and Chicken products, and that loads of their friends have them in their lunchboxes my Children were useless. Seriously, I asked them what they'd like me to make for them and I got blank stares back! In the end they said, Mum can you make whatever it is that you are going to make us for lunch fun, exciting and most importantly tasty?

I panicked. Eventually, I had some ideas that I hoped would be tasty and most importantly quick to make. Yes, when you read further on you might think that they aren't quick to make but I promise you they are!

For this first lunch I used the Bernard Matthews Slices of Turkey Breast, RRP £1.50. Actually, I also used it for the second lunch too. This is the great thing about the products, they are versatile and easy to use and perfect for busy Mums too. 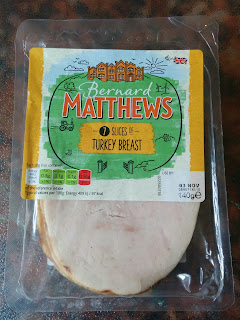 Don't you love the new design packaging? It's so cute and funky looking!, you'll think the first one takes AGES, but honestly it only takes five minutes, well eight if you include boiling the kettle! 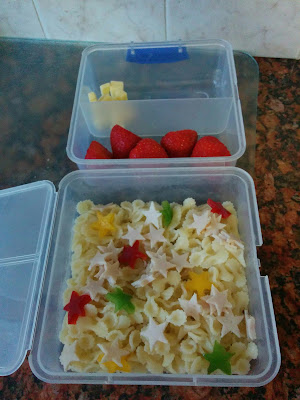 
Start by boiling your kettle and put a pan on the hob with a small amount of water in to start heating up. Well, at least that's how I do it. This will be to cook your pasta in, but I bet you had already worked that out.

The second thing to do is to wipe over your peppers. Then slice them in half, and then into quarters length ways. I do sometime chop off the ends so that I have straight pieces of pepper, but this isn't always needed if you're okay with fiddly! Don't forget to give the insides a wash too.

Using a biscuit cutter, press out the desired number of stars from the peppers. I can normally get at least six stars from a quarter, but if you are more logical about the cutter placement you can probably get more. You can do this with carrots if you want to, just slice them thinly and cut out the stars from the circles you create.

At some point your kettle will have boiled, so add the hot water to the pan, wait for it to start boiling again and add the pasta. I tend to use small pasta shapes or soup pasta because the Children love the mini size and it's quicker to cook.

Whilst the pasta is cooking, you get to use your cutter to cut out shapes in your slices of Turkey Breast. The good bit about this is that there is always a little Turkey left over which is perfectly acceptable for you to eat as a perk of making an awesome lunch! I love that the Turkey used in the Turkey products are all 100% British and it always makes me think of Norfolk too. 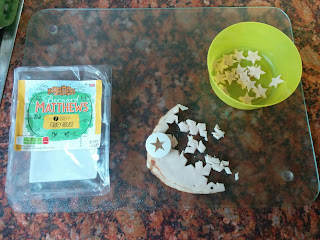 By this point, your pasta is probably cooked. All you need to do now is drain it, add any seasoning you want (and anything like butter, but I find it makes the pasta a bit too greasy as it congeals) and of course mix in your stars.

Of course, if you wanted to simplify this even more just cut the peppers and Turkey slices into strips and stir into the pasta, but who wants to eat boring plain strips when you can have stars? Or Autumn leaves? Or whatever other mini Cookie Cutter shapes you have in the cupboard?!

As you can guess, this is such a fun lunch to make and one that can be made the night before (whilst you're making the evening meal perhaps?) and kept in the fridge ready to avoid a morning rush.

The Children loved the pasta and BB said that a teacher asked if she could have BB's lunch! I am seriously going to have to go into business making lunches for people, or at least the staff at BB's School. Top Ender reported back that whilst she was sitting down to lunch, her best friend reached over and stole one of the Red Pepper stars and was after doing a lunch swap. Top Ender held her ground however and invited her friend round for an evening meal, promising that I'd make something extra special with the Bernard Matthews cooked meats range... look out for that blog post soon!