A Funny Story About Socks

- August 31, 2016
Everyone knows that I like Socks. It's one of the things that I regularly get sent links to via DM's, Facebook and email of different socks that people think I might like. It's a bit like how Jay likes Bacon and Rum and Nickie loves Stationary and Running (and her fitbit) and Sian loves the London Underground and Morrissey... 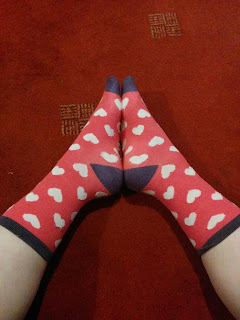 Earlier this year I went to a Relief Society evening. The Relief Society is an auxiliary for women at the Church I go to (The Church of Jesus Christ of Latter Day Saints) and we were celebrating our Birthday/Anniversary by having a little party and getting to know everyone a little better. Previous to the evening we had emailed one of the women (we'll call her Dorothy) organising the event with two things we liked, two things we didn't like and two things that people might not know about us.

All the women were sat in a sort of semi-circle and me and a few of my friends were clumped together in one corner. We started playing the game, where a parcel was passed round and as we unwrapped it, we read the clues that were wrapped up and as a group we had to work out who we were talking about. Dorothy was in charge, confirming when we'd got people who hadn't been able to make the evening and keeping us moving along, because we ladies do have a tendency to go off topic.

The evening was progressing nicely. We were all having a giggle and loved finding out things about our friends that we hadn't known before, or we had known but had forgotten in the case of one of my pole dancing friends! 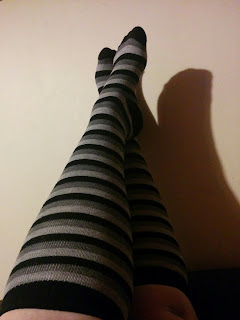 Eventually it got to a lady just a one seat away from me. This lady was a little older and I love her lots so I'm going to call her Rose (Yes I am referencing the Golden Girls for names here!) as she read out the list of things that were on the paper I realised that it was me and so tried really hard to make myself look like I was wondering who it could be.

Rose started reading out the list, which Dorothy had lovingly handwritten in her bestest neatest handwriting. It started well.

"I once dated an Italian Prince, he was a red head." (It's true I did, although my understanding is that every other family in Italy is related to a Royal Family and so it's not like I dated Prince William or anything)

"I'm not keen on driving." (Again it's true, unless it's Flyfour's new car)

And then it took a turn.

"Do I really read this?" asked Rose
"Yes!" said Dorothy

There was a pause and I swear the room went quieter than a room of women has ever been.

In that moment some of the older women were horrified. We were at Church and someone was mentioned S-E-X?

The younger women started to laugh hysterically and the group in the middle who were sort of shocked also started laughing.

I was wetting myself. My friend Sophia sitting next to me lent over and read over Rose's shoulder and clarified that it said;

"Bed SOXS. It says that she loves bed SOXS!" said Sophia
"Oh! I haven't got my glasses on." Said a shocked Rose

This of course started everyone laughing, even the people who had been a little shocked to start with. I'm sure that the laughter only lasted for a minute, but I swear it seemed like ten minutes passed before we were all able to stop laughing.

That night I posted this picture on to Facebook, and had it confirmed that the evening had bonded us women together thanks to the accidental misreading of Dorothy's handwriting and choice to spell socks as sox.

And as a last thought on the subject, every single woman that attends my Church is going to get a pair of Bed Socks from me for Christmas this year. I can't wait for them to open them up come Christmas Morning and start corpsing in front of their family, unable to explain why a pair of socks is so funny!
Family Life Funny Religion