- August 29, 2016
When Top Ender and I set off to walk my sisters dog, we decided to take the bare minimum with us. Basically I didn't want to carry a handbag. So instead of taking my wallet, I took out my bank card, about five pounds in change and my phone.

Top Ender and I loved our walk. We threw a ball at least a million times, we scooped up poop, we ran, we walked, we sat, we petted, we explored... it was a brilliant walk. 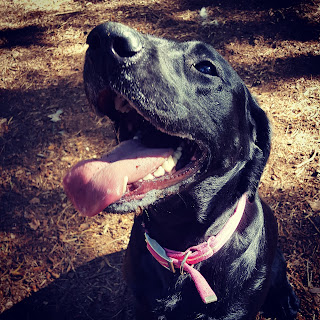 Afterwards we popped into Tesco and it was at this point that I realised I didn't have my bank card. Luckily between Top Ender and I we had enough cash to pay for our purchases and we went home, where I phoned my bank to cancel my bank card.

The next day we headed back to the same woods that we had taken Poppy to the day before.

Top Ender and I took it in turns to throw or kick the ball for Poppy, we were having a blast watching Poppy run about and she was enjoying herself if her tail was anything to go by! 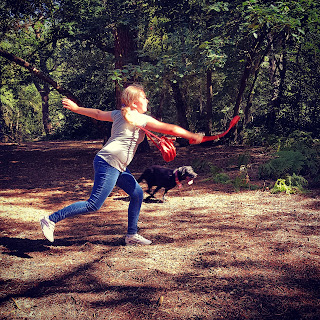 We walked a different route this time because we also took my Mum and the ground wasn't exactly stable underfoot, what with all the tree roots, branches and undergrowth. At the top of a hill we found a clearing big enough to throw the ball about for Poppy, but with the added benefit of it having a bench like feature that my Mum could rest on.

Top Ender and Poppy went for a bit of a walk around the woods with Poppy and suddenly shouted out that she and Poppy had found my missing bank card! 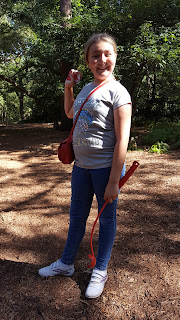 One half of me wishes I hadn't cancelled it, but I know if I hadn't then someone would have found my card and had a bash at using the Tap and Pay.

So, has anything amazing like that happened to you?
Family Life Free Days Out Pets