Have You Got A Camp Bucket?

- August 26, 2016
I'm pretty certain that the only reason that Top Ender wanted to go to Guides camp was because she had heard about Camp Buckets when she was a young impressionable Brownie and wanted one. From her description, all I could work out was that a Camp Bucket was a bucket which she would keep some stuff in and would also act as a seat at some point during her camping trips. They are apparently invaluable to Campers and we all know how much Top Ender loves Camping. 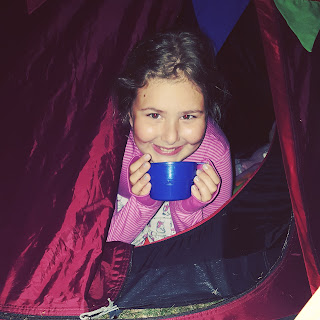 Flash forward a few years and Top Ender was given the all important Camp Bucket prior to her first big Guides Camp and she was tasked with the very important job of needing to personalise the bucket by decorating it. Older Guides let us know that Sharpies worked best and one evening Top Ender sat and decorated her bucket.

Tops made such a great bucket that I thought I'd share a few pictures of the different drawings and the meanings behind them that she shared with me... just be warned cos I'm pretty sure she made some of them up!

For the last few weeks Top Ender has been learning 99 Luftballons (Yes, the German version, No I don't know why either) and I personally think that subconsciously she was thinking about this when she was decorating her bucket. Top Ender stated however that the balloons symbolised her childhood and that by having them float away it shows how she is growing up. Really  I think they were just easy to draw! 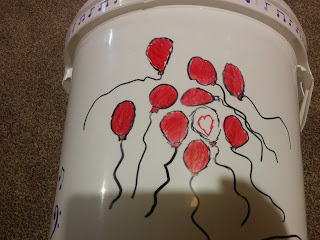 Tops also drew something that she loves about Camping, plenty of Nature and watching Planes flying overhead as she, like me, guesses almost 100% of the time correctly where the plane is flying off to. It really annoys Flyfour when we do that. 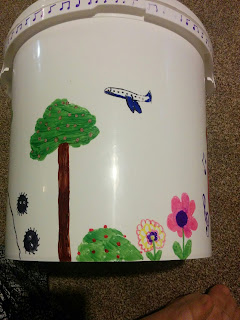 Tops also drew a Rose Bush, which she hopes is how her own Rose bush will look next year (I hate to tell her it won't, but I'm not sure it's alive, I may have to buy one and plant it and just pretend!). The Music notes around the top and the hearts were also my touch, a little something to tell her we love her (the hearts) and to remind her to march to the beat of her own drum. 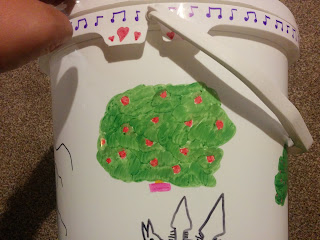 Tops asked me to draw a little something and the section she gave me was quite short (seeing as how it had a Rose Bush above) and I knew what I could put in that would amuse her, a Totoro and some Soot sprites! Top Ender was actually really pleased with this, because she loves the film My Neighbour Totoro and she was hoping to meet some fellow Anime fans... but she didn't! 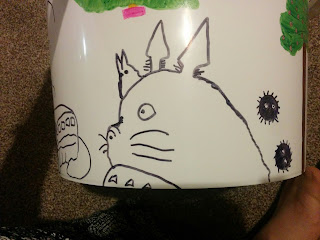 Underneath the balloons and next to Totoro, I drew The Cat Bus (from the same film) having a little snooze. You have seen My Neighbour Totoro haven't you? If you haven't then you're going to think I'm a little crazy... 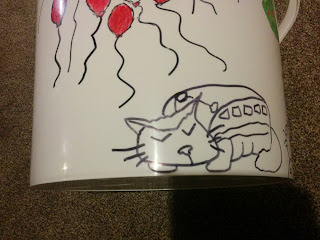 The last piece of art that Top Ender drew on her bucket (well that we're sharing anyway) was a pair of funky headphones. This was to show her love of music (not the treble and bass clef as now she is learning to play Cello it's all about the Bass here!) and also I think as Tops is normally found with a pair of Headphones I think they were there in case she started getting withdrawal symptoms! 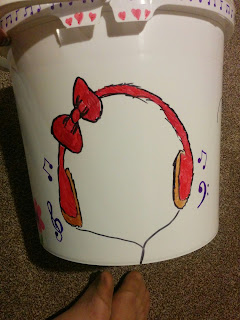 Of course, Dan Jon Jr and I have fallen in love with Camp Buckets and we're rather hoping to manage to source similar sized buckets for our future camping adventures with Top Ender.

So does anyone know where we can get one?
Camping Craft Family Life