Our Irish Adventure (The Bit With Magic)

- August 22, 2016
When I was writing this blog post, it started off as one blog post and what you are about to read was the end of that post. However, as I wrote the post become longer and longer and I decided to turn it in to a few blog posts (three including this one) and I thought I should start off with the best bit, the bit with the real life magic in...

At Easter we went as a family to Ireland. We had decided, Flyfour and I, at the end of 2015 that we would go away at some point together as a family in 2016. We had a few options, Summer Holidays, Easter Holidays, even the Half term week in October, but it was only when Flyfour found some bargain flights for a trip to Ireland at Easter that our plans fell into place and we worked out where we wanted to visit. We decided to fly across, hire a car and drive around the various places we wanted to visit. 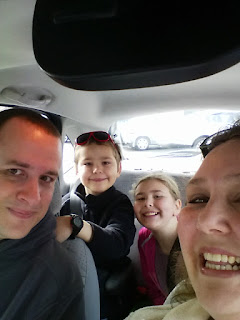 We hired a Renault Capture, which we picked up from the Airport. After a quick check of the car, loading our luggage into the boot, ensuring the children were strapped in safely and entering the postcode of our hotel into the sat nav we were off.

We had allocated a big chunk of our budget to putting fuel into the car, we were after all planning on driving round a big chunk of Ireland. We were keeping a good eye on the fuel gauge and were planning on filing up again at the end of the second day as our hotel was only a minute or two away from a Petrol Station.

Yes, we had used Google Maps to work out things like where Petrol Stations were. I admit it, we're boring people who like to be prepared.

It was when we got back into the car after having left it in a car park whilst we explored a town centre and went for something to eat that we realised we had a problem. 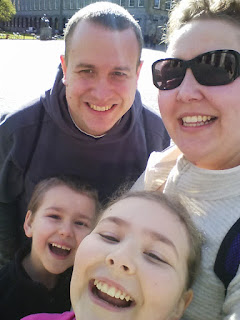 The fuel gauge which had been showing a slowly decreasing fuel level was showing that the fuel tank was full. It was obviously broken, so we did some quick sums, worked out how many miles we'd done, how efficient the car was and figured that the car should have a quarter of a tank left so we could risk getting the car back to our Hotel and going to the petrol station nearby as soon as it opened in the morning rather than driving around and hoping that we didn't run out of fuel before we found a Petrol station that was open.

The next morning we got to the Petrol Station just fine and Flyfour attempted to put in some Petrol.

The tank was apparently very full.

Flyfour pulled a funny face at me through the car window as he went to pay and visions danced through my head of us breaking down miles from no where, no mobile signal and us missing our flight home due to being given a dodgy car by the hire company.

Meanwhile Flyfour told the tale to the Gentleman working in the Garage, who laughed and said that "Leprechaun's like to play tricks!" and rung up the sale (which was luckily more than the minimum delivery amount).

Of course, we told the hire company who gave the car a once over and determined that the car was fine. The fuel gauge was working fine and nobody else had experienced anything odd with the car we had hired.

So we took from this the only thing we could, our Irish Adventure had a real Leprechaun encounter! 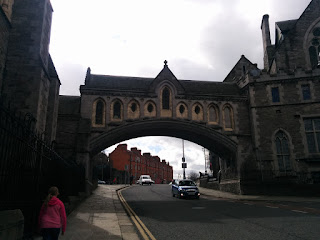 Make sure to come back tomorrow to find out more about our Irish Adventure, where we went, what we saw and why I now live in a University library...
Family Life Funny