Dan Jon Getting The Priesthood

- January 19, 2020
The predictions I made about the morning of Dan Jon's ordination, went almost exactly as I had said it would. Bishop did indeed stand up and say he'd had the opportunity to interview several of the young men and did say that he found them worthy to be ordained as Deacons and the whole ward did sustain them. I guess I have been paying more attention when this has happened in the past than I thought!

After church and Sunday School had finished, Dan Jon, Tops and I, along with two other families, filed into one of the classrooms just down the hall from Bishop's office where the boys were going to be ordained. 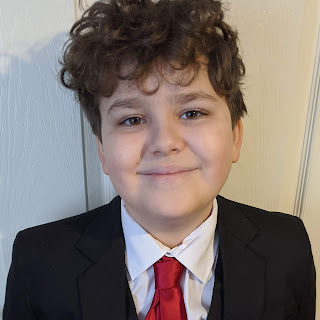 All of the families knew each other, I mean we all know each other really well and we were enjoying being together, joking and giggling and preparing for what was going to be a big milestone in our son's lives. The two other Mothers both had sons who were progressing from Teachers to Priests and one of the Mums also had a son who was about to be ordained as a Deacon too. It was like a big family gathering and a really lovely feeling, as it didn't feel like we were gatecrashing someone else's party but like we all belonged together.

It was agreed that one of the Priests, the eldest son of one of our family friends, would ordain Dan Jon. It was a special moment, one which I don't think I was really ready for and it was certainly a very spiritual moment which afterwards several people in the room commented on.

The following Sunday, Dan Jon was to pass the Sacrament for the first time, as that is one of the duties for Deacons. It was really odd, but strangely normal seeing Dan Jon standing at the Sacrament Table and walking carefully down the Chapel to where he was to start passing the Sacrament tray he was holding. It was like he had done it a thousand times before though, he looked comfortable and sort of implied I was making a big fuss over nothing when I said I was so proud of him.

I don't care if he thinks that, because to me it's a HUGE deal and I really am super proud.
Family Life Religion