- January 02, 2020
At some point on New Year's Eve, after I had realised that the pills the Doctor had given me weren't going to make me feel better without the manoeuvre he'd suggested I try, I asked Flyfour to help me carry out the manoeuvre. I couldn't' do it on my own. I needed someone to help me get into the right positions and I needed someone to time me and basically force me to do what I had to do. It involved sitting on the sofa and moving my head and body in one direction and then another and my head needed to be held at specific angles too.

I was supposed to do five rotations on each side but managed just one and a half before needing to throw up and feeling worse than when I'd started. I had to ask Flyfour to stop, or rather I told him I was stopping in between bouts of vomiting! 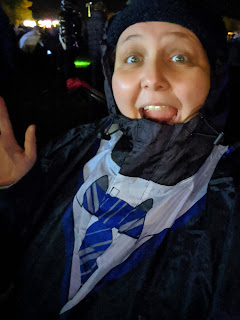 An hour or so later as I half lay/half sat on the sofa, half propped up by pillows and the arm of the sofa I used my phone to find some answers and came across something called the Epley Manoeuvre which according to the forum I'd found it in was my best chance of almost instant recovery. So I mentioned it to Flyfour and asked him to look it up a bit more because reading on my mobile was making me feel even worse.

Flyfour was diligent in his research and read everything he could find about the manoeuvre on various medical websites, watched youtube videos and eventually was confident that he could help me to reposition the calcium crystals that had moved in my ear. I have great faith in Flyfour and the internet so I lay on the floor, whilst Flyfour knelt at my head and helped me to manipulate my head into the right starting position.

Flyfour knew straight away that I was in the right position as my eyes started to flick around as my brain was sensing movement that my body wasn't. I'm not sure that I should be totally honest with you here, as I'm pretty sure I used some choice words as Flyfour helped me move into the next positions and the mixture of screaming and shouting because of the room spinning and the nausea I was feeling, probably led the neighbours to believe I was either giving birth or being murdered. Plus I'm pretty sure that the amount of vomit I was producing would put anyone off hearing what happened in full detail.

However, what you really need to know is that it worked.

The relief whilst not complete was almost immediate and I know if, or rather when I'm afflicted with this BPPV again, this will be the very first thing I do!
Family Life Illness life skills