The Sad News About Mario

- January 27, 2020
I shared on Facebook the other day, that I'd just spent a rather large amount of money to find out that our cat was going to die and there was nothing that could be done about it. 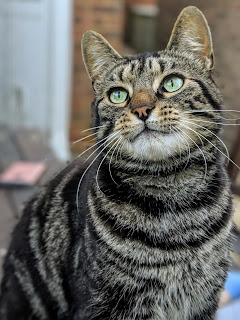 A few weeks ago we realised that Mario, Dan Jon Jr's cat, was breathing a little funny, he was short of breath and it seemed as if he needed more time to do normal things so he could catch his breath. We went to the Vets and I explained that I thought it was a case of Mario having Asthma, and the Vet did too, especially as Mario was busy investigating the entire clinic and begging for attention from all of us as he came back to tell us about what he had discovered during his exploration.

He was given a steroid injection, which would hopefully help a little with his breathing and we agreed that a week later the Vet would take some X-rays and this would rule out a heart issue and hopefully confirm asthma. It was going to cost a small fortune, but it was fine. Mario is a part of our family and a small fortune to make him better is a small price to pay.

Only, that's not quite what happened.

Instead, when the vet looked, she found that Mario had cancer.

There were tumors in his lungs, his heart was in the wrong place because of another growth and as she broke down crying telling me over the phone, she was really surprised that he was as happy and as active as he was, because, well, in her experience he shouldn't have been.

We were told that in the next few days, he would stop eating and we'd need to make a decision about what we could do to make him comfortable, or rather stop the discomfort he was in. That evening,  Mario slept on the living room sofa and well, we thought that it was going to happen that night. He was so weak, his breathing laboured and his sleep was disturbed.

It was a bit of a shock to see him the next morning, awake and active and running around begging for food. In fact, as the days have gone on, he's become more playful and more active, spending time with each family member, enjoying the extra cuddles and the benefits of being able to get away with things that only a cat in his last few days would be able to get away with.

So, we know it's coming. We're sad of course, but we're making the most of having him with us right now and also a little worried about how our two remaining cats are going to feel when he also dies as it's not been that long since Moses died and they are still missing him and mourning too.
Family Life Pets