Being the Receptionist at a senior school meant that I got to see all of the deliveries that were coming into school, and was the one that would sign for the huge bouquets of flowers that had been sent to celebrate various loved one's anniversaries or birthdays or even in the case of some, "just because I thought it would be nice".

And, well I was a little jealous.

Flyfour knew this and so thought he would surprise me with having some flowers delivered to me at work on our anniversary. It was almost my last day as a receptionist, and so he thought it would also be a bit of fun for me to receive a delivery that was for me too! 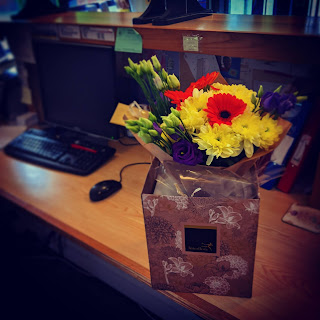 Only, by Noon, the flowers hadn't arrived (as they were supposed to) and Flyfour opened an online chat with the company he'd ordered them from to find out what was going on.

The chap that Flyfour spoke with was lovely (well according to Flyfour) and apologised for the late delivery and said he would investigate by calling the people that would be doing the delivery and see what was happening.

Only they didn't answer when he called. Or again when he tried a few minutes later.

Maybe they had been delivered and I hadn't had a chance to text Flyfour to say thank you suggested the online chat chap. Flyfour was certain I would have let him know, but the chap was sure that there was a possibility that the flowers had been delivered early like at 8 am and I just hadn't let Flyfour know.

Suddenly the chap on the online chat had a great idea! He could see that the delivery was to a school, so he'd call the main number of the school and ask the receptionist if some flowers had been delivered... You can't do that! said Flyfour, then she'd know and you'd spoil the surprise if they haven't been delivered!

The chap assured him, that no he wasn't going to call and speak to the recipient of the flowers, but instead, he was going to call the school and check if the flowers had been delivered. Flyfour once again explained, that he couldn't do that, that if he did that the surprise would be ruined because the recipient was the person who'd answer the phone!

Luckily, all was well. I was indeed surprised and I got some lovely flowers and Flyfour got all the credit for being an amazing husband!