When we were in the Lake District, we explained to both children that we wanted to make more of our weekends and our time together as a family and that we'd like to further our time together by ensuring that each weekend we went for at least one walk as a family and maybe give us a chance to spot some hidden sights that we wouldn't normally see, like this mural of a Bluetit on the side of a home we saw at the weekend. 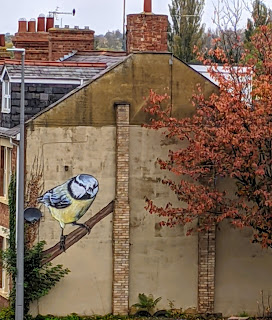 The children were accepting of our plans, I think mostly because they thought that they would be able to blow off going with us, but Flyfour and I had a plan and nothing was going to stop us, so just before we went to bed we sent a family group whatsapp message informing everyone that a family walk would be taking place the next day and that attendance was mandatory. Flyfour followed this up with a message explaining that there would be a treat halfway though the walk, which did lead the children to think it was a trip to IKEA, but our plan was far more cunning than that.

We figured a short walk of around two miles in Milton Keynes, where the terrain is considerably less undulating than the Lake District, would be a good way to encourage the children to walk with us. We also figured that a stop halfway through the walk at a Barge covered in sweets would also be a good call... even if it did negate the benefits of the two mile walk!

And so we set off, discovering a rather cool little Fairy Village, spotting a woman who appeared to be foraging for dogs poo (it takes all sorts) and several families also out for a walk and making the most of the reasonably pleasant weather for the time of year.

We eventually found the barge, which was indeed the treasure trove of sweets you would expect it to be, with our initial "You can have £2 to spend" (all bags are a £1) to, "Errr, you can have one more bag because your mother and I just found another packet that we would like!". 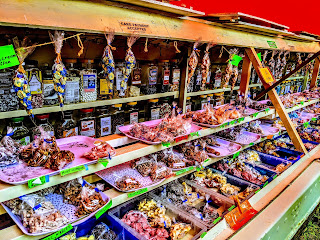 On our way back from our walk to the Toffee Boat (do I dare tell you how much we spent at the Toffee Boat? It was more than £10 but less than £20!) the children took great delight in making a point of showing that they had been listening to Flyfour when he had informed us all that we were walking the route of an old train line. Whilst Flyfour and I walked along the rather overgrown platform, the children decided to take upon themselves the role of train, rather enthusiastically as we could hear them chugging and clanging and making other noises of steam trains with abandon! 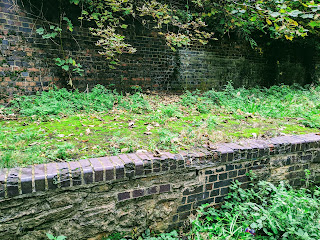 Later when we talked about the walk, we expected the children to say their favourite part was the sweets, but they surprised us by explaining about different stretches of the walk that they had enjoyed.

Now all I have to do is find another walk to go on next weekend with them.