Flyfour and I were talking on our walk the other night about things we had been doing at work that day. We both use the walk, not only as a way to exercise but as a time to use each other as a sounding board, to problem solve and to reassure ourselves that the decisions we made that day were the right choices. As we were discussing the various problems and successes of the day we both came to a sudden realisation.

We're grown ups and very mature and adult like. So, with that, it's going to be only serious grown up meals from now on...

Okay, you got me there is no way I could ever always be a mature grown up! 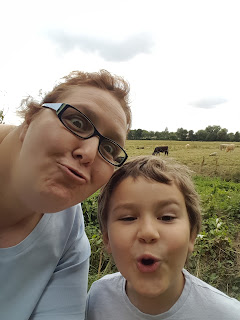 Flyfour makes a great curry, he makes great naan breads and he makes a mess which he then mostly clears up. What's not to love?

Remember a couple of weeks ago when Flyfour purchased Steaks? Well, we put some in the freezer and now he's defrosted them as that's what he wants to cook. I guess they will be nice after we've gone for a long walk this afternoon...

A combination of everything I can find in the cupboard will go into making a hearty chilli, I'll serve it with rice and slices of buttered bread because everything is better with a slice of bread.

I'll be happy, the children won't. I'll give them some form of potato too, (less salad that way!) and tell them that I only want them to grow up healthy and happy and wise. Who knows, it might be that they actually enjoy the meal.

I'm going to cook Sausages on Tuesday night, so that on Wednesday, whilst Top Ender and I are at Rainbows and Brownies Dan Jon can just give them a quick blast in the microwave and make a sandwich for himself.

If' I'm super lucky, Tops may heat some up before walking to collect me from work and I'll get to eat one whilst I get changed into my uniform!

I think there is nothing better than a nice piece of Salmon. I'm not sure if I'll pan fry, roast them or even do them in the microwave (actually that might be next week) but one way or another there will some salmon on our plates tonight!

It's been ages since we've had this, so I thought it time to dust it off and have it again. I love the "stodge" of the rice, but with the mix of prawns, sausage and chicken and the additional flavourings of peppers and some other veg I've managed to sneak in, it's a good choice for the family in my humble opinion!

So there you have it. That's what grown ups eat. What are you eating this week?