Another week, another meal plan and another argument over what we're eating! I had organised for us to have Fish Pie on Sunday, but the family decided that they actually wanted Meatball subs... so the meatballs I had purchased for a meal later in the week have gone to that and I've moved the Fish Pie to later in the week because they aren't getting out of it!

The weather has turned a little here this week, so I've got a lot of comfort foods, plus a lot of foods that are easy to prepare or can be cooked in the slow cooker during the day because despite having a new job I still seem to stay later than I'm supposed to. 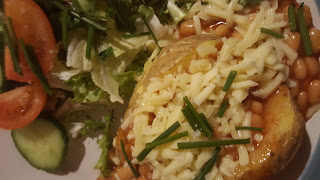 Every week Flyfour goes down to Bristol and sees a Butchers that sells good cuts of meat, but cheaply. So this week Flyfour decided that he was going to purchase some Brisket and some Steaks, only they didn't have any Brisket! It's fine, tonight is Steak with Chips, mushrooms and some form of veggies.

Now that we have some nice vegan cheese and some nice lacto free cheese, we're back to having meals that have cheese. I am so grateful because cheese is soooooooo good. By the way, just in case you are wondering lacto-free brie is actually really lush.

I was going to be mean and make Fish Pie tonight, but I'm not that mean. I'll have Tuna, spring onion on mine, the children will go with beans and Flyfour will opt to eat at lunch when he is at work.

Flyfour managed to drop into conversation that he has had some really lush gluten free fish and chips when he was in Bristol and then the children decided this meant they wanted fish and chips on a Tuesday just like Dad.

Luckily, we don't have to worry about going too far to get it as the chip van delivers to almost outside our front door!

Between getting home from Work and going out to Brownies, I should have just enough time to swallow down some casserole. And by swallow down I mean carefully chew each mouthful savouring each bite because casserole is the best.

Just don't tell the children that I've dropped in a tonne of lentils and veggies and may have "forgotten" to put in the meat as maybe they won't notice if we don't tell them!

If the family won't let me have fish pie we'll have fishcakes! I'll server it with wedges and a little salad to keep both the children and me happy!

So, I'm assuming that we will eat on Friday night, but at the moment we are planning on eating out/on the road. I think we should all eat at lunchtime and have sandwiches for supper but who knows what will happen if I ask the family to help me with this!

So, that's what we're eating this week! How about you?