When we go away, which as you know isn't often, the one thing that always sticks out to Flyfour and I is how much family time we get. The trip to the Lake District, saw us eating at a dining table every mealtime and even though we do eat together at weekends, we realised that there would be much more opportunity to be together at mealtimes if we had a proper dining table area and if we had more seating in the living room, we could all sit comfortably to watch a movie or a TV show together.

The only issues are the dining table is in the way of where we would put more seating and the one other place we could put a dining table is an area we refer to as the den. 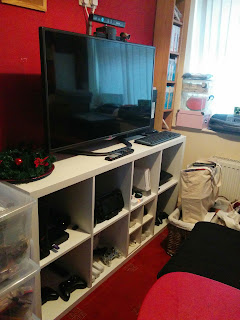 The den was created as an area that the children could sit in to play games on the Wii, the Wii U, the Xbox, the Playstation and the Switch. And probably some other consoles that I've forgotten about. It was close enough to the living room and the kitchen that we could listen in on the conversations that were had between our child and their friends and so could put a stop to any shenanigans but tucked out of the way so that we didn't have to actively watch an hour of Minecraft!

Only, now the children are older they tend to play in their bedrooms.

So Flyfour and I asked the children what they thought of our idea to dismantle the den, diving the consoles up between them in their rooms and making it a dining area, whilst also making enough room for additional seating.

They thought it was a great idea.

I swear my parents never made being a grown-up look this hard!