the five people I think I will meet in Heaven 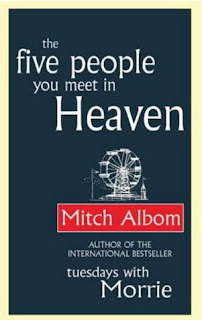 I love the book The Five People You Meet in Heaven, I picked it up in a bookstore because it appealed to me as I like the writing style of Mitch Albom (who also wrote Tuesdays with Maurie which one day I will use as inspiration for "I'm one of the Wednesday People") and I like to see what others think Heaven looks like!


The first time I read it, I knew that if this really did happen to me that I knew who the five people I would meet, would be. Some of them read this blog and if you realise that I am talking about you then I hope that you don't mind appearing here. I think that I have managed to keep you anonymous and if you want to comment I won't out you.


The first person would no doubt appear to me as I remember her. A shy eight or nine year old girl with a huge heart and smile to match. It was this young girl that had completed a piece of homework and had allowed me to read it. It was this piece of homework that changed my life (but I don't think that homework counts as a person) as it made me realise what it was about this girl and her family that was so beguiling.


The lesson in Heaven that she would teach me would be that everyone is connected and brings you to your destiny, sometimes with something as simple as a piece of homework.


The second would be someone I wouldn't recognise as a person, but from the way they talk I would know who they were. They would show me that sometimes being the person that I want to be is as easy as just speaking out and not judging myself. They would tell me that although it was their words that I valued many moons ago and that kept me from turning on myself that it was my words that reminded them of who they wanted to be.


The lesson in Heaven that he would teach me would be that every life has meaning, even if we don't feel that ours does, someone somewhere is a better person because of you.


The third person would be a woman who I knew in her golden years, but in Heaven she would be in her prime. I still hear her echo even though she went to Heaven herself at the start of this year. She would show me the things that happened in her life that had a direct effect on mine. She would show me her childhood, her first and second marriages and the things that she did in order to survive for her six children.


The lesson in Heaven that she would teach me would be that all people make choices and sacrifices and it is the ones that appear the hardest that allow others to live.


The fourth person would be a woman I once trusted, but she won't be there for herself. She will be there because she once started something with the person she is there for now. Someone who when he dies will be surrounded by people he thought he loved, but not surrounded by those who really mattered. She would explain the reasons as to why choices were made and the hurt that was caused from these choices and I would need to forgive the man she is there for and maybe even need to be forgiven. But this is a lesson I haven't learnt yet, he isn't forgiven.


The lesson in Heaven that she would teach me would be that I should let go of anger and forgive those who I feel have done me wrong, because it is a poison that kills all around.


The last person I meet could be one of several people, but we both know it will be him. He will take me in his arms and tell me how beautiful I am, and we will watch my life and see all those that matter to us and see them flourish under our love. We will watch as my past self cries over the heartache of him, laughs over the joy of him and grows from the love of him.


The lesson in Heaven that he would teach me would be that love is eternal. As simple as that. Love is Eternal.
Do you know who your five people would be?
Family Life