The Yummy Mummy With no Tummy Challenge - Week Six

The other day I was talking to a friend on Facebook. She asked me about my weight loss and how I was finding things. I was honest with her and told her that it was hard, and that I had a long way to go. It was at this point that she asked if I had considered surgery as with my BMI being so high I could be considered for this.


She knows a lot about this option, as earlier this year she had a laparoscopic gastric bypass.


I told her that I hadn't considered this and I wondered if she would be willing to share her story with us all here. She graciously agreed so here is Angel's story with a few interruptions (I'll stay in black!) by me!
Hello Everyone,


Earlier this year I weighed 22 stones. Then I had a laparoscopic gastric bypass. This is more extreme than just a gastric band as instead of your stomach having a band it is where you have your stomach stapled and bypassed.


Gastric bands are something that most of us know about. Everyone seems to know that Fern Britton, Anne Diamond, Sharon Osbourne and Tina Malone has had one and that they lost weight following the fitting and they all publicly have admitted it to being a good choice for them.


The facts are that a band is placed around your stomach, effectively creating a stoma which when full registers in your brain as your entire stomach being full and your brain starts yelling Stop Feeding me!


The food then slowly moves from the top part of the stomach to the bottom part, which helps you feel fuller for longer. 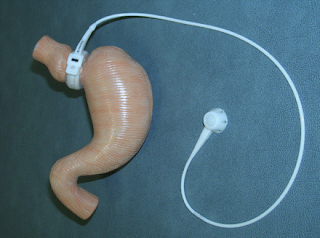 Image with thanks to The American Journal of Roentgenology.
The band has to be adjusted over a period of time, to allow the right restriction to be found so that it is not so loose that you are hungry or so tight that you can't eat anything. As everyone is different there isn't a set level. Now back to the story.
My dieting experience in the past was diabolical. I was yo yo dieting, taking stimulant amphetamine based pills, slimming clubs, but whatever I tried, my weight just went up. I started eating for comfort, because I was miserable about my weight and the worse I felt the more I ate, it was a vicious circle.
I had heard about this operation 7 years before and even looked into the idea before I asked my doctor to help me to have the operation. I applied to the Primary health trust, and was applicable for the cost of the operation, I was thrilled to bits, because having been so desperate, it was worth looking forward to.
I took into consideration that it wasn't going to be easy to obtain my goal straight away, but I didn't care, I wanted to live. I had been told I could die at a young age without the operation, so I thought to myself, what do I want? Do I want to live or die?
I decided I would take the risk, because without it I knew how much weight I was carrying and what it was doing to me physically. My ankles were swollen, my face was bloated and I had all sorts of other things like glucose intolerance, it just couldn't go on.
I had to see three people before I was approved there were, a psychologist, a bariatric nurse, and a dietitian, and I had to write an honest food diary. First of all I had to go on a special milk diet with sugar free jelly, 2 oxos a day, multivitamin and mineral tablets. I did this for two weeks, and I stress it was under strict dietary supervision, do not try this at home, I had to be strict with myself, and do everything as I was told, to prove I could only lose a small percentage of my body weight. Even on this restricted diet I only lost 1 stone 5 lbs.
The psychologist was the hardest part for me, because I felt wary about what I was supposed to say to get past the test if you like. I was just truthful though and I was approved.
It was then anything up to a year before I would have the operation. Two weeks before you see the surgeon for your operation, you have to do the milk diet again to enable your liver to shrink. This is because for them to do the operation they cant risk working on your stomach and your liver being so close.
Its a very risky operation, and I was told that one in a hundred people could possible die during the operation. I told the Surgeon that it was ok because I had a donor card. I was a scared but had to make light of it, because I thought if it showed he may be nervous! Thankfully he wasn't.
The operation took 4 hours, and was done with a laparoscope and other scary looking instruments. I had 7 incisions around the tummy area, and I was shocked it took this long as I thought it would take less time.
The stay in hospital is usually 3 to 5 days. I spent 5 days, as I developed a urine infection which hampered my recovery, but another lady on the ward left the hospital after 3 days, I don't know how she managed it! The bit I didn't like was the morphine, (it had an unusual effect on me to say the least!) but I had to use it as an operation like that leaves you feeling hurt for a few days!
When I got home my diet was a lot different than before as I now have a smaller stomach. Its like being a baby really. I started by using liquids, and then weaning onto solids. My dietitian gave me a diet sheet and instructions of how to eat and how long to stay on liquids for etc. But there is a complication called dumping syndrome which is where your stomach may reject something which its not capable of taking. It isn't nice and its trial and error, but in the end you learn to know what personally suits you.
Me again. Dumping Syndrome is where there is difficulty digesting the food that has been ingested. You feel faint, nauseous, dizzy and your heart starts racing and you generally feel anxious. It can take several hours for this to pass.

There are some foods I cant eat, but with practice I have learnt to eat a near normal diet in small portions. Where as before I would have eaten off of a big plate before the operation, now I can only manage a side plate full of food. For example one day I can eat a tin of big soup, and a meal of shepherds pie, and be quite happy all day with that and a tin of peach slices. I do have to make sure I chew everything properly though.

I have to have a vitamin b injection every 3 months, take calcium and vitamin d every day, and a good multi-vitamin and multi-mineral tablet and 2 iron tablets every day to replace what my body doesn't get with such little food, but it has to be worth it to gain a quality of life.

Ive lost 7 stone in 7 months, I can walk without having to stop in the charity shops to sit down on the chairs in them every so often, I also feel better in myself because I can wear nice clothes instead of mens XXXL clothes and big flip flops, and looking every bit ridiculous.

There are other drawbacks to overcome, like leftover flab, which I will worry about later on as I have another 3 stone to lose before I will know how to deal with the leftover flab. But to be alive has to be the biggest blessing of all and a bit of leftover flab can be covered by clothes in the short term.
I am learning how to get my confidence back now, which is the greatest thing of all, I don't feel despised as much as I used to feel about my weight. I cant advise anyone else to go for it, because I wouldn't want to take the guilt if it went wrong, but I went for it and I'm glad I did now, so that's it really, good luck to anyone who can do it and feel better.
Love Angel
If you feel that Surgery is an option for you, then go and speak with your Doctor. They will not judge you and you may find the answer you are looking for.
Don't forget to stop by the others on the challenge, they need your support too;
Rainbow Jelly @ Rainbow Jelly Ramblings
Shutter Betty @ A Shutter Betty Blog
Amy @ And 1 more means 4
Tina @ Tales from Tina
And if you want to join in then its not too late, you don't have to be a Mummy to a young child, you can be a Mummy to a fur baby (Dogs and cats to those not in the know!) a wannabe yummy with no tummy, or someone that just wants to think about what they eat and how they exercise! Please leave a URL link to your post in the comments below and I will update this post with your URL and you will automatically be listed next week.
Weight And Fitness