Which hand would you use to pick up a dangerous snake? Brilliant, I'll use yours too then.

- September 08, 2009
The BBC had an article that girls are born with fear of dangerous animals (BBC NEWS World Americas Girls 'born with fear of spiders'). I would beg to differ you see I have a phobia about snakes. Just thinking about them makes my skin crawl and I have to draw my legs up to me just in case there is one crawling on the floor. Hang on a minute will you? I'll be right back.

Sorry I had to check that there wasn't one on the floor. There wasn't, but I am now sitting with my feet on a chair next to me just in case one was hiding from me. Right where was I? Yes that's right snake phobia.

I know when the phobia started and its my Mums fault and The BBC's. You see I wasn't always afraid of snakes. I remember touching a snake when I was about four. I remember the feel and thinking that it wasn't slimy and I didn't have a phobia then. I know I didn't because I touched the bloody thing!

It started some time in early 1986 when my sister and I were watching The Really Wild show. It was a new programme and everyone watched it. A snake came on the screen and I think Terry Nutkins was telling us about it. 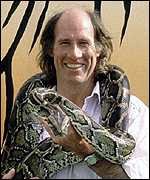 "Mum! Mum!" I shouted
"What?" she shouted back from the kitchen (where she was making dinner)
"There's a snake!" I shouted
My Mum ran full pelt into the living room with a knife in hand (See Bear, it runs in the family!)
"Where?" she almost growled ready to protect her two daughters from the snake
"T-t-the Telly!" I whimpered worried that my Mum was going to hack at the telly... or me

I don't remember what happened after this. I assume that my Mum went back to the kitchen to carry on preparing the evening meal, but I do know that it was this incident that made me associate snakes and danger (A big bloody knife does that to you!).

Now I can't watch films when snakes are in it (Harry Potter was a nightmare, he can bloody talk to them!) without watching from behind my fingers and I can't put my feet in the bottom quarter of my bed, because everybody knows that's where the snakes are hiding.

I can't go in to reptile houses (But I did twice when Top Ender was little as I didn't want her to think I was scared as I didn't want her to be scared, but I stood near the door and cringed and when Daddy thought he would be funny and tapped me on the shoulder, well lets just say that also may of been part of the reason we didn't have Baby Boy for so long after Top Ender!). I can't walk near long grass, just in case there is a grass snake laying in wait. I can't sit down on the toilet in the dark, as a water snake might bite my bum.

I can't walk past the house where the man who has a snake lives, because it might get out and eat me. Its a big snake. I haven't seen it, but I know its a big one and it would eat me whole. And whilst we are on the subject does every town have a man who has a big snake? (That sounds rude doesn't it?) has anyone actually seen his snake? (That sounds rude too doesn't it?) and can anyone verify its size? (Its okay I'll stop now)

A lad at my last job tried to convince me that I was afraid of snakes because I was religious and had an indoctrinated fear of evil and snakes due to The Garden of Eden Story. Being LDS that just doesn't wash however.

I know that its the fault of Terry Nutkins, the BBC and my Mum.
Family Life