- April 13, 2010
Its nearly Baby Boys Birthday. He will be two and as such I am going to have to stop treating him as a little Baby and start treating him like a little boy.

The first step in this is by making his bedroom more suitable for a Boy than a Baby.

I started by putting Baby Boys name on his door. 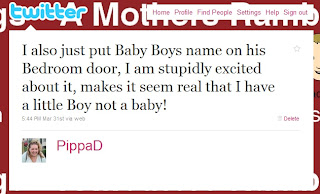 I went to bed that night and lay on Daddy's side of the bed so that I could see Baby Boy's name on his door. I was so proud of this small action of mine and the reaction of Baby Boy when he first saw it and was told it was his name.

We also put up a photo frame from Ikea (its the one that looks like a strip of film) with some pictures of Ducks in (again they are from Ikea!) as he loves them. He shouts "DUCK!" at them and then giggles. 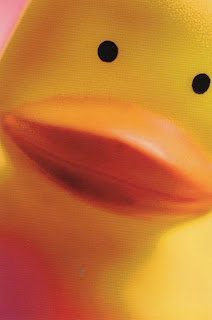 We put up a picture of a Leopard that his Nanny painted and gave him at Easter and a square blue pin board, which we are going to add postcards and other bits to as we go along. Lastly there is an old movie print from Finding Nemo on the back of his door which we have to say Goodnight to every night;

"Night Feesh!" Baby Boy says touching each fish in turn with a kissed finger
"The Fish say Night night and mwah to you too" I answer

I know that it is only a few small changes but its changes that mean that I am already able to see hidden underneath the Baby curls a little Boy... My Little Boy. 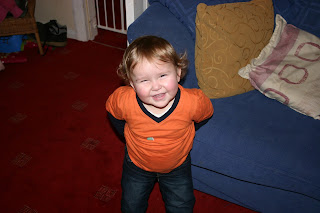