Since finding out that Daddy is coeliac there have been a few meals which he has missed because they can't be made without wheat (or at least I can't make them and you can't buy wheat free versions) and so he has had to put up with seeing adverts or new products that he would really like to try but he knows he can't eat. Then the lovely team at Amy's Kitchen approached me to let me know that they have wheat and gluten free products and sent me some vouchers to buy some of the range.

Daddy went to Sainsburys (they are also stocked in Asda and Waitrose, but Sainsburys was closest!) and brought the Vegetable Lasagne, the Mac and Cheese and two Burritos as they were all gluten free. The products are found in the frozen foods aisle, but have a home cooked taste about them. It was the home cooked taste that the founders of the company were looking for when they created the products when their own daughter was small and they were short on time. 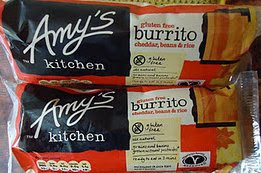 The meals were eaten over the next week as Daddy had a few late nights at work and getting home he wanted something quick and tasty. I managed to sneak a mouthful here and there and despite being designed for children they are very flavoursome and a good size too. The products are great to keep in the freezer for nights when we are running late or when Daddy decides that he wants a late night snack.
Food Gluten Free