Toy Review Round up

- October 13, 2011
All the toys mentioned had been sent to us to review and I've been naughty and not done them... until now.

Over the last few weeks Top Ender and Big Boy have been playing together with some great new toys. It has been great seeing them develop the bond of brother and sister more fully and also to see just how clever they are as they work out how to play with the toys together. I haven't got a look in with these toys, (it's been quite a disappointment with some of them) and so I have had to sneak a play when the children have gone to bed, which has earned me some funny looks from Daddy!

One of the favourite toys sent out was a doll from the Bratz™ All Glammed Up range which was sent for Top Ender to play with because she loves the Bratz cartoons and films (we own all the films and there are a lot). Top Ender played with it a lot, using the accessories as they were designed (to style the dollz hair) and because she wants to be a fashion designer when she is older she loves that the Bratz dollz are about passion for fashion and being BFF's. Big Boy has also loved playing with the doll and the accessories, although he has been trying to curl , crimp and straighten the cats fur. Luckily our cats are wiser than they look and have avoided Big Boy's hairdressing salon thus far... 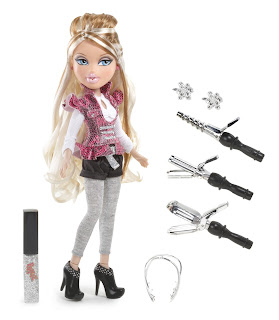 One thing that is worth noting is that Big Boy playing with the toy hasn't broken the toy and he isn't exactly delicate so the doll and accessories are fairly robust. They are £19.99 each, suitable for ages 6 and up (although BB is 3) and are a good quality fashion doll.

Big Boy loves to watch our DVD of Angelina Ballerina and will often ask me to read him Top Enders books  of her old style adventures. The newer Angelina Ballerina adventures are also appreciated by Big Boy and Top Ender but the Dance and Sing Angelina Doll is something which Big Boy has claimed as his own. The doll has two small buttons located on either side of her waist and so when it is squeezed you can make it either sing or repeat a preprogrammed phrase and if you push it again you can make her do some ballet moves. The doll has an RRP of £25 and is suitable for ages 4 and up (again BB is 3 but plays with it well!). 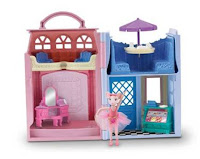 The Angelina Ballerina Chipping Cheddar Sweets and Dance Shop Mini Playset has also had a good outing, with Big Boy playing out scenes from his imagination and using the mini figures to enhance his scenes and of course dressing and undressing the mini figures and swapping their clothes about. Seems that Big Boy is also looking into a career in fashion! The playset has an RRP of £20 and the mini figures have an RRP of £6 and both are suitable for ages 4 and up, although smart 3 year olds will have no problem it seems!

Something which I was really excited about were the Hot Wheels packs that arrived, as the track can be left set up as it attaches via sticky pads to a bedroom or playroom wall. Top Ender put it together and stuck it to the wall without thinking twice as she followed the hanging template. Luckily she put it where I was going to put it and I have to assume that she did a great job because it has't fallen apart yet, unlike the track I built last chirstmas which lasted a grand total of ten minutes! It's great because Big Boy can just play with the hot wheel track when he wants to rather than waiting for me to build his track. A wall track starter set has an RRP of £29.99 and the stunt set has an RRP of £16.99 and they are suitable for ages 4 and up. 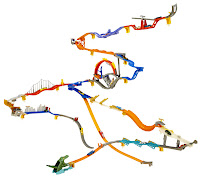 Bumpeez have been a huge hit in our house. These plastic discs are a playground hit with several of Top Enders friends collecting them and keeping the little information sheets marking off which ones they have in their collection in their pencil cases. Top Ender and Big Boy love them so much that they have brought several packets with their pocket money and are sharing them out between the two of them. You can do tricks with them, but I think that Big Boy and Top Ender just like the look and feel of them and when I tried to do a double wall bounce trick I ended up losing the Bumpeez underneath the sofa! The RRP for the Bumpeez is £1.99 a pack (there are two in a pack) and they are aimed at 5 to 11 year olds which probably explains why I can't do the tricks without losing the disc down the back of the sofa. 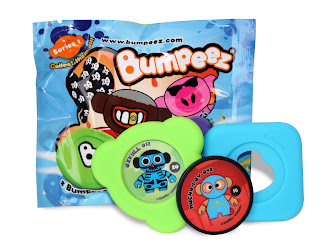 There has been one game that I have been allowed to play though and that was Mookie SwingBall. This is a portable version of the swingball that graced many back gardens in the 80's and 90's. Whilst Top Ender and Big Boy might never be Wimbledon Champions they can at least pretend with this version of Swing Ball. Unlike Swingball of the past which was screwed into the ground this has a base (which doubles up as storage of the bats, ball and pole) which means you can set it up almost anywhere and just by adding water or sand to the base you can keep it steady.

I think I have played with it the most as I have been playing against myself and have been getting a pretty good work out from it. It's an easy thing to add to the car when we go out for an adventure and so quick to set up that if we need to burn off some energy whist having a picnic we can. The RRP is and it is suitable for ages 6 and over (BB aged 3 loved it, even though he wasn't very good at it!) and is probably something you want to keep your competitive friends away from! 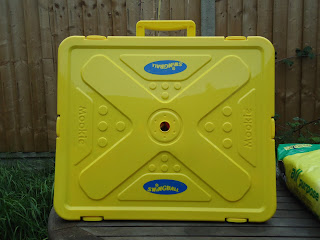 So there you have some of the best toys that were sent to us and I think would be great as a Christmas gift!
Summer Toys