- October 29, 2011
We were sent a Sainsbury's giftcard to buy Puff Pastry and Sausages with. I had enough change to buy some Vampire teeth.

One of the things I love about Sainsbury's is how they have helped families see that they can feed their families nice and healthy food on a relatively small budget, the Live Well For Less name is an accurate description of what they are doing! The latest 5 Evening Meals for £20 has just been revealed too and there are a few meals there that I will add to the A Mothers Ramblings menu in the next few weeks. Some of our old favourites still haven't made it on to the Sainsbury's meal plans though, which is a shame because some of the by Sainsbury's products are absolutely perfect for them and so when we were asked if we would like to try out some of the range we thought we could try to persuade Sainsbury's to add Sausage Pie to a future meal plan by making that with two of the products. 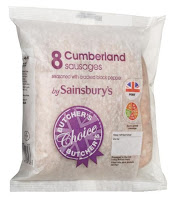 I have talked about how easy it is to make Sausage Pie before, you just brown some sausages in this case the Cumberland Sausages from the by Sainsbury's range, before placing them in an oven proof dish and covering with gravy. I like Cumberland Sausages, although sometimes Tops and BB find them too spicy with the black pepper seasoning but these were nice, they weren't too heavily seasoned and smelt lovely as they were browning. They are £1.99 a pack (and until November 1st part of a buy 2 for £3 range) and went great with the rolled puff pastry.

The puff pastry was good, it unrolled easily and I was able to add it to my dish and use the excess to create some roses around the top of the pie which is one of my favourite additions! The puff pastry costs £1.25 and there was enough for my pie, decorations and some of the Halloween Sausage rolls that I made for Top Ender's lunch the other week which I think is a lot of pastry for one pack.

I didn't have time to take a picture of the Sausage pie that I made, because as soon as it was out the oven Top Ender and Big Boy were singing a "We Want Dinner" chant very loudly and I thought it best to feed them before the neighbours came round to see me taking pictures of their dinner (the children's dinner not my neighbours) rather than feeding them! 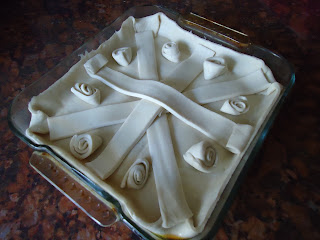 They say you eat with your eyes and I think that this is true because the pie looked tasty when I took it out of the oven. It was all golden and crisp looking and there weren't any leftovers for us to eat the next day at lunch as they were all eaten that evening. If you haven't ever made a Sausage Pie then pop out and buy the ingredients this week I promise you will love it and then together we can tell Sainsbury's to add it to their meal plans!
Food