When I was at University, I lived on soup. I had a kettle in my room and about a million powdered soup packets on the top shelf of my wardrobe. I liked them because they were quick and easy, didn't need a fridge (and therefore didn't require me to walk upstairs to the spooky, cold and normally dirty kitchen) and were tasty. The problem now is that I am a little older (and possibly a little wiser, but that is debatable) and have a more refined palette and most of the powdered soups taste just like that. Powdered soup. When the new Heinz range of Squeeze and Stir soups landed on my doorstep I was hoping that a shot of concentrated soup like this might change the future of instant soup!

I made the Minestrone soup for me because the Vegetable soup was gluten free and so Daddy could try the soup too. I found it to be thicker than other types of instant soup and as it was just a case of squeeze tube into mug and add hot water I found it easier than powdered instant soup as I didn't have to worry about making sure there were any pockets of unstirred powder. 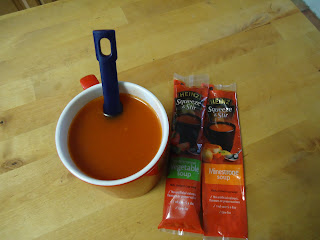 The soup was normal tasting, as in it tasted like soup. It was certainly richer than powdered soup and it would be nice to keep in a work drawer or University wardrobe but it wasn't as good as either tinned soup or home made soup. 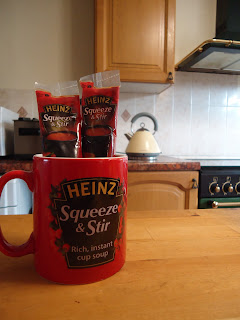 Daddy too thought it was nice, but was more interested in the conversation with one of  his colleagues about what eating the concentrated soup would be like (I managed to persuade them both that this wasn't a good idea). Seeing as the packs are only 59p each though I don't think it will be long before they are trying out some form of concentrated Soup shots dare game!
Food