Spooky Fishcakes - Fish is the Dish!

- October 31, 2011
The other week I went off up to Scotland to meet up with some Bloggers (Mum in the Mad House, Transatlantic Blonde, Frugal Family, Off the Eaten Track, Mediocre Mum and Susan K Mann) and the good people who are part of Seafish. It was a great time and I learnt a lot about the fish industry, the history of fishing in the UK, a lot about fish packaging for supermarkets (which was actually very interesting), I ate more fish in two days than I think I had done in the entire month previously and I also found out that there is a small chance that Transatlantic Blonde's in laws and my Mum know each other after growing up in the same Scottish village. To give you some idea of the fun we had, take a look at this little video because I think it rocks and also I think that the tune should be my new theme tune that you all hum when you see me...

So why did I go to meet these Bloggers and Seafish? Well, it was the start of the new campaign to get everyone eating more fish, it is a brain food after all. They aren't trying to push one type of fish or even a brand but just trying to get people to see that fish is easy to cook and after our day in the kitchen making Pate, Soup and baked fish I have to say I agree with them! Even filleting a fish is easy, we were shown how to do it (and I kind of rocked at this by winning the little contest between us all) and when I got home I showed Top Ender and Big Boy how to do it too. That's right my seven year old and three year old can fillet fish.

(Video can be seen at http://youtu.be/5afmfj2g2mk)


Last Friday Seafish sent me some Haddock Fillets to make some fishcakes with and the additional challenge that they had to be spooky. It was with thanks to my Mum that I came up with the idea of making them Ghost shaped, 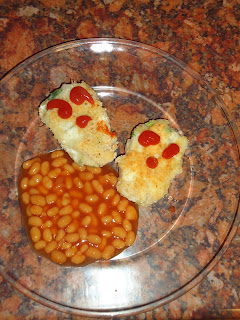 but that didn't really work and so I gave them to Top Ender in her lunch today as spooky eye balls, with a little bit of food colouring making the pupils! 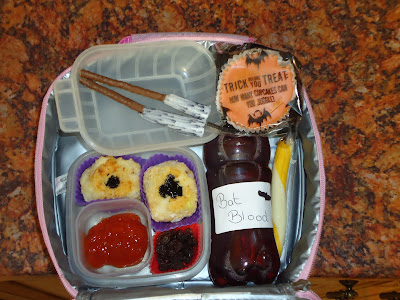 The fish cakes were delicious and the recipe that I worked from is found on Mummy's Knee I just used five haddock fillets and 5 spring onions instead of the Salmon the recipe originally called for. I guessed at how much potato to use, and Daddy was pleased as the fish cakes weren't overly fishy but had more than enough fish in them to count as a portion. They were a little time consuming to make, but they were worth the effort and I have frozen some of the excess so that it will take less time the next time we have the fish cakes. And if you want to watch me make the fish cakes you can...

(Video can be seen at http://www.youtube.com/watch?v=46dvJgdhGsU)

You can also find lots of recipes on the Fish is the Dish website, but right now I have to go and eat my leftover fish cakes for lunch too.
Halloween Main Meal