Old Friends, A Playtpus, A Randy Squirrel and Me

- October 13, 2011
When I was pregnant with Top Ender I was excited and nervous in equal measure. As it was my first pregnancy I had no idea if some of the things I was experiencing were normal or if this was something I should be asking for an emergency Doctors appointment for and so I turned to the internet. In fact I joined a community on ivillage for Mums like me who were due between October and December 2003. There I met a group of women who were my support system. Women who would share jokes, the milestones in pregnancy and their lives. These strangers became friends and some eight years later I still keep in touch with them thanks to the magic of Facebook, although I hadn't actually met any of them in "real" life.

Last week whilst I was coming home from Edinburgh one of these friends (Elizabeth) contacted me via twitter to let me know that one of our other friends (Hameeda) was trying to get hold of me. Hameeda is the sort of woman that everyone needs to know, you know the one that can do anything if she puts her mind to it?  That's Hameeda. She also makes a mean Samosa. Anyway, Hameeda had applied to Super Savvy Me to be filmed with some friends sharing tips and due to some last minute issues wondered if I would be available to be part of it too. I said yes, not because of the filming (I'm getting old hat at that now!) but because it would be a chance to meet three of the women who have meant so much to me. 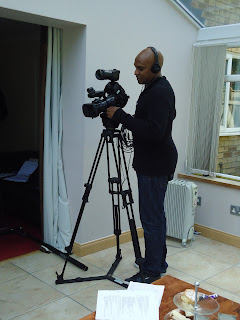 The filming was fantastic fun, chatting with these women in the flesh was amazing (and it only seemed a little weird that I wasn't typing my replies to them) and I tried really hard not to be Blogger Pippa (even though she is a lot better at handling these sort of social situations) but fell at the last hurdle (I'll tell you more about that in a few days) and the video of our coffee morning will be live today on the Super Savvy Me Facebook page. There might be mentions of a randy squirrel, a drawing which looks something like a platypus (Rachel claims everything she draws looks like a platypus), a lot of laughing and cream cakes being eaten in our video as well as our tips. In fact there is a sort of little competition on who has the best tip going to be going on, so if you could all pop along and vote for me I would appreciate it... there is a bar of chocolate riding on the outcome!