- April 04, 2014
Do you remember the very swish pedometer that I was reviewing a while back? Well, as you can probably guess (as is normal with me) after a few months of wearing it, I stopped. It wasn't the pedometers fault, it was my own. I know that I'm useless when it comes to keeping up with my weight loss and fitness regime. I'm sure that it's not because I'm lazy, but because when I don't see the results I want I start to lose interest and having small things remind me on a daily basis that I'm not helping myself hurts me. With the pedometer, I could quite clearly see how many steps I had taken. I could easily work out how many steps I was lacking in reaching my daily goal and so I stopped wearing it. If it showed 0, then I knew that it showed zero because I hadn't worn it, not because of lack of effort. I know, talk about cutting off your nose to spite your face right?! 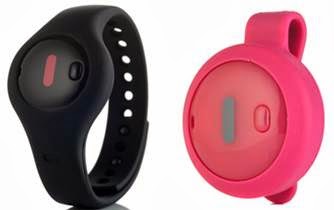 I was asked if I'd like to review the new Fitbug Orb and I said yes, because this time unless I logged into the app each day I wouldn't be able to see how many steps I had taken. I'd get a true representation of what I was doing each day. I started wearing the orb as a watch, it was easier for me but the band would make my arm really sweaty, so I swapped to wearing it on my waist band or my bra band as I found it fell off my waist band fairly often.

After the first week of wearing the Fitbug Orb, I logged into my profile to see what was going on, to see how bad my daily exercise habits were. I was pleasantly surprised. Whilst I hadn't hit my target everyday, I had hit my aerobic steps and I wasn't really that far off my targets. With the clever way that the Fitbug works, I got a new target to hit for the next week and wouldn't you know, without trying I hit the target each day. As the weeks progressed and my targets increased on some days I hit my targets and other days I didn't.

The other good part of the orb is that when I remember to tell it that I'm going to sleep, it measures what kind of quality of sleep I'm getting, how long I'm sleeping and if you don't know then you should that sleep is important if you want to lose weight or get fit or just generally enjoy life.

Now the bad parts (other than it keeps falling off my belt) despite setting the orb up to sync with my phone and give it my steps, I've noticed that every so often it doesn't and I have to force it to. Of course this isn't really an issue, but the weekly emails sometimes came back to me telling my that I'd not hit any targets or taken any steps! I might not exercise a lot but I sure do exercise a bit!

There is sometimes a discrepancy in the number of steps it reports I've taken. Sometimes it's only a few hundred, but after a rather long walk/jog a couple of Wednesday's ago I know that it was at least 2,000 steps less. I thought at first it was just the orb being sarky, and telling me there was no way that I'd actually exercised that much... but then I remembered it's a machine and at the moment not capable of being sarcastic. From reading on the internet there have been some others with similar issues, but they've been solved when turning on stride Extender. I've not tried this yet, but will do the next time I feel like going out for a jog (Stop Laughing!).

The Fitbug Orb is £49.95 and for me has been a great addition to my exercising life. Mainly because I have to keep running back upstairs to get it after I've left it on my PJ bottoms and I've gone downstairs to make breakfast, but also because it's great for helping me to see that a little extra each day adds up in the end.

I was sent the Fitbug Orb to review.
Review Technology Weight And Fitness