- November 24, 2016
Dan Jon Jr got the short end of the straw when the genes that make him were jostling for dominancy. He had no option but to get curly hair, both his Daddy and I are cursed blessed with it, but for some reason my hairs lack of obedience and desire to do it's own thing won out and Dan Jon ended up with a mop that normally looks like the below. 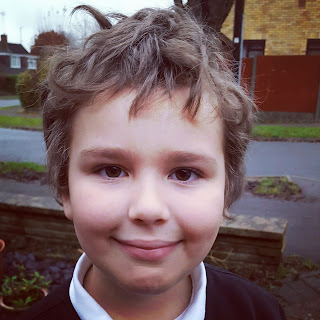 And that's when it's been brushed!


Dan Jon wants to grow his hair long, he loves his unruly locks and I must admit that I love it too. I love that his hair does it's own thing. I love that he constantly looks untidy and natural and like a little boy, in fact he's looked like this since he was tiny and I kinda want to keep it this way because then he won't be able to grow up and not be my baby any more.

Flyfour however, would like Dan Jon to look a little more neat and it's a big thing in our home, even our Bishop teases Dan Jon about his unruly locks needing a hair cut! Just before Dan Jon Jr went back to School, Flyfour managed to get DJ to have his hair cut, but it was a little too short for DJ's liking still! I mean look, his hair is still long and curly! 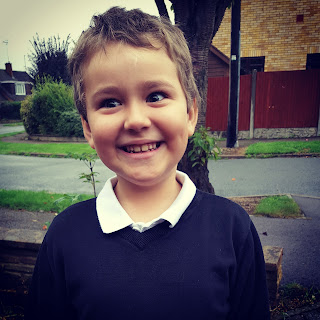 We needed to come up with a plan, we needed to find a hair cut that Dan Jon would like, that Flyfour would like and that suited Dan Jon and his bubbly personality. He inherited that from me too.

It was when I was at School the other day, I saw a year six student with a hair cut that fitted the bill, really curly and long on top, but neat around the back and sides. I know most of the students fairly well, so was able to strike up a conversation with this young lad and ask him about his hair and if he liked it and you know the usual things you talk about!

I mentioned this lad to Dan Jon Jr, he knew exactly who I meant and after looking up a few pictures on the internet and forwarding to my hairdresser friend asking if this was a possible haircut for Dan Jon, we agreed this would be Dan Jon's new haircut.

Which is why an hour after Dan Jon was sitting in the hair dressers chair he looked like this. 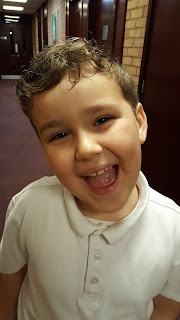 That's right, we went with a short back and sides and kept it long on top. Our lovely hairdresser friend told Dan Jon that as his hair grows, she can cut this hair at the sides and back but keep the top long and eventually it will be all shaggy like he likes, but with a neatness to it. I'm just glad that she sees Dan Jon at Church each week and can remind me when I need to book him in for another trim!

The next morning, Dan Jon Jr wasn't so happy.

Dan Jon, doesn't think his hair looks cool and thinks that the youth members he talked to the night before might have been lying to him. He thinks that maybe Flyfour, Top Ender and I are lying to him. That the hairstyle we found that was a compromise for both him and Flyfour (messy and neat at the same time) isn't as great as we said it was. 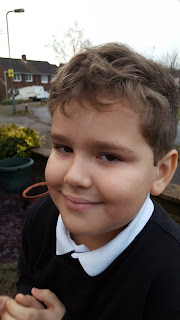 I honestly think, his hair looks wicked and I can't wait, for his messy top look to become the norm in the morning photos on his Instagram feed and for Dan Jon Jr to realise he looks fantastic!

So, what do you think? Does this hairstyle suit Dan Jon Jr?
Family Life