It's a Grey Day

Well, I thought looking at some pictures from the Summer might cheer me up and I figured that you might like to take a look too because the memories of a Summer Day is better than sitting looking at an actual real life Grey one!

I took these pictures on a day trip to my Nan's. It was just before the weather turned at the end of August and we had an absolute blast. Flyfour hadn't been able to join us and when he sat looking through my photos later in the week he was shocked at how blue the sea and sky were. I'm pretty sure there were some comments about how he was sure we had actually sneakily flew off to somewhere hot and sunny, but this was just plain old Norfolk. 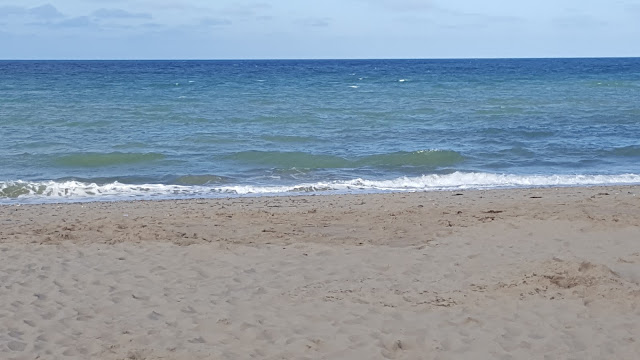 Dan Jon Jr, Top Ender and I had purchased some really cool Bubble Wands from a discount store. Top Ender said they were the same as ones we had seen at various different musical festivals. I have no idea if that is true or not, but I can confirm that they were a hit on the beach not only with the Children but also with other people who were walking along the beach because the bubbles were so big and the screams of delight from the Children. 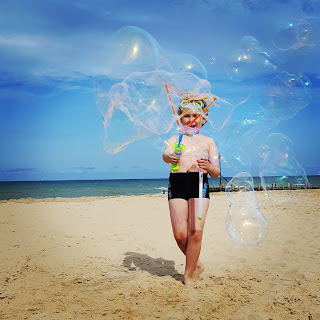 This next picture was of Dan Jon just before he went snorkelling. He was so hilarious about going in the water and hoping to be able to see something other than seaweed. Of course he was sorely disappointed when he was unable to see anything, but it didn't stop him from looking cute! 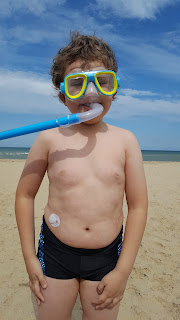 During the Summer, the Children and I were given a friends Butter Beer recipe and what better way to drink it than in an Owl shaped glass?! My friends recipe was good, but I still like my version better as it tastes more like the one we had when we went to the Harry Potter Warner Bros. Studio Tour although I do know that my is also a lot harder to make, takes a lot longer and is also a bit more calorific. 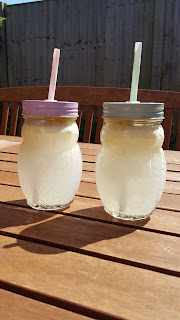 Right, now I've cheered myself up (and hopefully brightened your day too) with a few memories of the Summer and reminded myself that the Sun will be back, I'm off to try and do something a little bit more productive. I just have no idea what that will be just yet!
Family Life Seaside Summer