- November 30, 2016
Last year, was the first year that both Dan Jon Jr and Top Ender tried to stay awake to ring in the New Year. Amazingly, they both managed it and I think in part it was due to the ways I'd been thinking up to get the entire family to ring in New Years Eve together, rather than everyone spending most of the evening hiding in our own bedrooms or on different consoles and being together but not actually doing anything together. 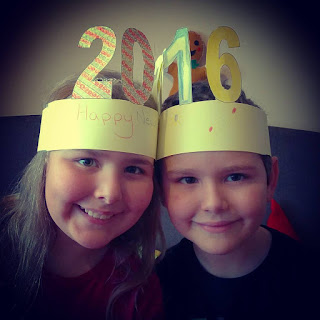 The family all agreed that I could be in charge of activities and as long as there was food and I did listen to some of their suggestions as to what we did and ate then everyone would be happy... So, I planned activities to keep us busy the entire day.

The following are ideas that worked for us last year!


Play a Board Game

We love board games and have a whole cupboard, but I think our favourite games to play are Cards Against Humanity and Man Bites Dog. Two games where the juxtaposition of the ideas being presented are what cause the most amusement.

I think as long as the boardgames played aren't the sort that cause MASSIVE family arguments and someone tipping over the game board before storming off upstairs that Boardgames on New Years Eve can be a great way of getting the whole family to feel closer.

Play A Console Game Together


Since we've put the Game Consoles into the Den, we've found that it's much easier to play the games. This has led to us on several occasions all sitting on the den sofa, playing various racing games or other games where we don't need to move very much...

For the games where we do need to move we need to work out some place a lot bigger... Did I mention I want to build an extension any time in the last year?!


Last year we spent some time crafting 2016 hats together. Top Ender also made a few Window clings and Dan Jon Jr made some more books. His personal library of books that he has written is getting quite expansive. We really need to build him a little bookshelf!

This past year, I've really been working hard on my crafting skills, including Drawing, Crochet and Knitting. This New Year, the Children and I are planning on making a giant mosaic of photographs that we've loved from the year and our plans for next year!


At the start of the year I was volunteering at Dan Jon's School, hearing some Children read and helping them to develop the skills needed to understand the text that they were reading. It really gave me a greater understanding of reading and more importantly gave me a much BIGGER love of reading.

Of course the Children and I have had several reading challenges this year that we've set each other and ourselves and knowing us, come New Year's Eve we're going to have a last few chapters to read... well I suppose I'd better get on and read now so we don't!

Anyway, try reading a book together as a family. Each take a paragraph, or a page, or a chapter!


This past year the children, Flyfour and I have been placing memories into a memory jar. Actually, I have, the rest of them have been a bit rubbish about it! It's just been short sentences of things that have been funny or good, or things that we have celebrated.

This New Year, we're planning on reading all the different pieces of paper and remembering these special moments that happened during the year.

After all we all love to laugh!

Next year, the Children and I have a few projects that we're planning on undertaking that we don't want to spoil the surprise of, but be prepared! Good things are coming!

Last year my Friends had a great time singing Karaoke together on New Year's Eve and I thought it was a really great idea and one worth stealing!

The Children and I often have Karaoke sessions during the year as we love to sing, but having Flyfour around whilst we do it AND on top of that also possibly having a dance routine worked out for us all to perform at the same time... well, I think that would be rather cool!

Eat, Drink and Be Merry!


Last year I made my first Fake Away Kebab on New Year's Eve. It was a huge success and has been repeated many times during the year, even Flyfour has had a bash at making it (He was really rather good at it!) as it really was so tasty and easy.

This past year Top Ender, Dan Jon Jr, Flyfour and I have all requested other meals we love from various Take Away establishments and we've tried to recreate them. The ones we love the most we're going to have this New Year's Eve. Along with lots of Cake and other goodies that are terribly bad for us but taste oh so good!


So these are our ideas for New Year's Eve, what would you add to the list?
Family Life Free Days Out New Year Treat Night