- November 14, 2016
Over the last couple of weeks, one of my younger neighbours (well, he is a teenager, that counts at younger right?) has asked me and his Mum (who subsequently asked me) about when my Christmas lights are going up. I think that he may be more excited that I am and I am REALLY excited.

The problem that I have is that last year the lights that I had inherited from my Sister, (who herself had inherited them from a friend) were looking a little tired and broken and repairing them might look simple according to the youtube videos I've found, but I think it will also work out really expensive.

So I decided that I what I really needed to do was look into buying some new lights, which again costs a fortune according to the internet research I've been participating in. However I found something that was rather fun and wasn't that expensive... an LED Kaleidoscope Christmas Light Set! 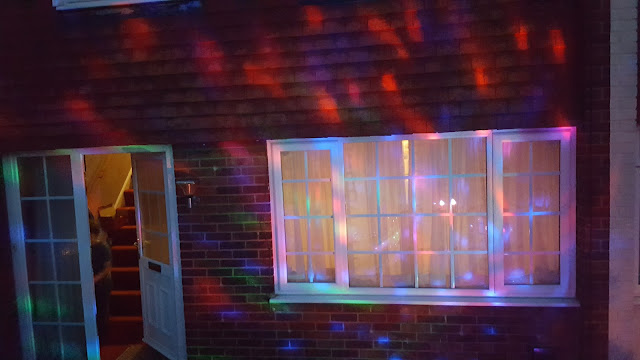 Flyfour and I managed to set them up in the garden so that they only decorated the outside of our house, not that of our neighbours (which is a good thing!) and Top Ender and I have some rather smashing plans to finish off a bit more decoration before we officially turn on the lights during the last weekend of November or December 1st.

The great thing is, the Children and I have decided that what we really want to do is work on this every year and create something new and different and funny and something that our family can work on together.

We are really excited about it and can't wait to show you the finished design in just a few short weeks!
Christmas Family Life