Midway Through a Kitchen Refit

- September 28, 2017
So, if you're reading this then you are probably going to have a Kitchen Refit soon and so you should read the preparing for a Kitchen refit post if you haven't already. Of course, you could just be here to find out about how stupid I am, because well I am. Anyway, whatever reason has you here welcome and read on!

I was so excited for our kitchen refit. I had organised our plumber to come and fit a new radiator, I'd got a plasterer in to replaster the ceiling (and got my husband to paint it afterwards!). I'd ordered a new cooker and even managed to get them to get it to me quicker than they had told me in John Lewis when Flyfour and I purchased it. We had the Kitchen Fitter all booked in and then Flyfour went away for a business trip. 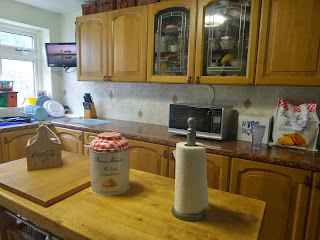 I thought it would be useful whilst he was away to pack up the kitchen.

OH MY GOSH NEVER DO THIS ALONE.
We had purchased six clear plastic boxes, I think we could have used another twelve! I got very creative and even ended up moving an entire cupboard into the garage because I just couldn't face taking everything in it out!

I swear, at one point I thought it would be easier to just cancel the whole kitchen and just live with it how it was.

Anyway. Then the problems really started.

The kitchen was delivered. 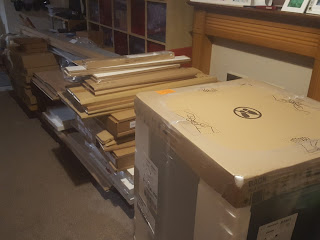 A day later and I suddenly realised I wouldn't have a washing machine for a week.

I had at least four loads of laundry to do of just so called "normal" washing and things we'd need to wash on our normal laundry day (Saturday) like the towels in the bathroom and the bath mat and the bedlinen for all three beds were needing to be done too!

So the day before the fitters were due I was washing EVERYTHING that was in the house and my Mum agreed that if Flyfour dropped off any loads we needed doing during the week we were without our washing machine in the morning on his way to work, she could have it washed and ready for him to pick up on his way home. You have to love family right?

And then the Fitters arrived.

And you know what? They were excellent. They got on with it, they did what they had to and it was brilliant. Even if my kitchen did look like a scary mess. 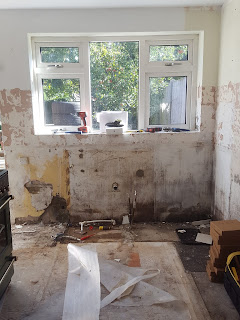 And whilst I was hiding from the Kitchen fitters in my bedroom, the Scaffolders came and I learnt some new swear words whilst they put the scaffolding up next door because we were both having our Soffits and Facias changed the following week.

And then the Electrician came to do some bits, like create sockets for the new position of the washing machine and tumble dryer and the DISHWASHER and the all essential kettle. I am British after all and despite being a Mormon and not drinking either black or green tea, there is nothing a cup of tea can't solve. Just in my case, it's a cup of herbal or fruit tea.

And then the Garage Door men came to replace the garage door.

And then the guys replacing the Soffits and Facias DIDN'T TURN UP and we got a phone call at about the time we were expecting them letting us know they had no idea when they'd be able to book them in again!

And all in all I realised that as much as I may hate cleaning and tidying up my home, as soon as I can't do it, it really gets me down! My house was a mess from piles of cardboard and kitchen appliances and kitchen units and the kitchen fitters tools and Flyfour and I just started feeling "GRAH!".

Grah is not a good feeling.

My advice at this midpoint of our Kitchen refit? Yeah, don't do it.
DIY Family Life Home Improvements Making A House A Home