Preparing For A Kitchen Refit

- September 27, 2017
When I was preparing for our Kitchen refit, I did the one thing that EVERYONE does. I googled for the suggestions that other people had made and well, I couldn't find any blog posts about it! So I had to live the old fashioned way and think about what would be best for me and my family. Luckily I also know I have a HUGE amount of friends who have great advice, so I asked on Facebook for suggestions.

And boy did they deliver.

So here is the benefit of my wisdom for those who are also going to live through a Kitchen Refit and also provide a laugh for those of you who have either already lived through one, or who just want to laugh at my expense!

The first thing I decided (after purchasing the kitchen, flooring. wall tiles and organising the fitting of it all!) is to go to Ikea or a similar store and purchase clear Plastic Storage Boxes.

Flyfour and I had discussed that we were going to use these again in the Garage (It's a new project that we're going to be working on when we've finished the house!) so we picked the largest boxes they sell.

The idea of them being clear is that you can easily see into the boxes to get out something you need if you forget to leave it out. I needed to go through them a couple of times, so I was mightily glad that they were see-through!

The next suggestion I was given was to run down the freezer and fridge. It might mean you have some weird combination meals, but hey nobody here cared too much and I found out that Hash Brown Fries (buy them from Iceland because they are amazing) taste good with everything!

I did this for two reasons. I wasn't sure if the guys were going to have to turn off my fridge and freezer and if they did I wanted to make sure that nothing was wasted and as we weren't going to be able to cook food in the oven for a while either, I figured we needed to use it up.

It was also nice and cheap, which meant I wasn't panicking about paying for the Kitchen!

The next thing I thought of was to arrange for the children to have school meals for the time frame around the kitchen refit.

I went with the children having meals a few days either side of the proposed timeframe of the refit, just in case it ran over or started early, plus it would give me time to get used to the new routine. That amazing routine of not having to make a packed lunch and having an extra ten minutes in bed.

Something that followed on from this, is to work out what you are going to eat in the evenings.

I was lucky that the meals that the children and Flyfour were going to be eating in the daytime were quite filling and so they didn't need to have a major meal in the evening and so were quite happy living on snack food, sandwiches and the odd bowl of noodles.

I had planned on us eating soup on one of two days during the time we were without a kitchen but it was too messy really, especially if like us you've just had new carpet laid.

Of course for this to work, you need to create a food prep area away from the kitchen.

Some friends used a utility room, but unfortunately, I've not got one, so I used my dining table in the living room. On it, I placed my Microwave, Toaster, Kettle, Toastie maker, the set of kitchen knives, plates and bowls, paper plates, cutlery, mugs, kitchen towels and of course useful things like oven gloves for taking hot things out of the microwave! 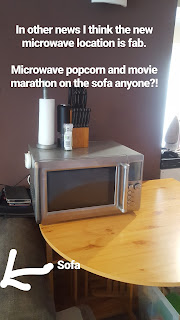 Things like the Kitchen Mixer and the bread maker were in the boxes in the garage because we weren't needing them, and I had thought that having my slow cooker was a bad idea, but I really fancied some proper food and so fetched it in one rainy morning.

Something I magically remembered, was to create a washing up station. Which is why I have been found kneeling in front of the new shower every other evening. I had a couple of plastic sink bowls to use in the shower (along with washing up liquid) to wash the used mugs, cutlery and dishes with and thanks to the small sink I have in the bathroom, using the shower to fill the washing up bowl!

Of course, if you want to know about living through a kitchen refit and all the things I got wrong and forgot about, you'll need to read my next post!
DIY Family Life Home Improvements Making A House A Home