- September 01, 2017
I have mentioned at least 10,000 times that I hated my bathroom. There are greek ladies, and a leaky toilet that wobbled and yes, we did manage to have a shower that fed off the taps installed back in July of 2015, but it wasn't at all how I imagined our bathroom. I imagined a sanctuary, somewhere that I could go and shower and not have to worry about the bath filling up with soap scummy water! 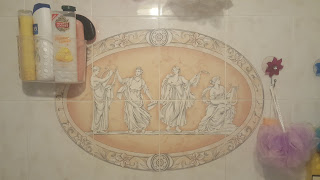 So, when we were talking about doing up our home, it was unsurprising that it was our Bathroom that was at the top of the list. I knew exactly what I wanted and after a little bit of a conversation with Flyfour, we arranged to get a few different chaps out to quote for the works in our bathroom. We ended up going with a chap called Mick, who agreed he could do the work at the end of August if that was okay and so we went ahead and got it all booked in.

I am not going to lie, living for a week without a bathroom was a NIGHTMARE. We ended up going swimming to shower a couple of times, strip washing in the kitchen, having a lot of water gun fights, using dry shampoo before we went anywhere that required us to look slightly respectable and the chemical camping toilet in the garage became our best friend during the day! 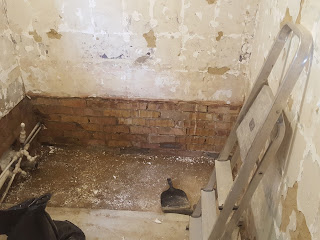 However, now look at my BEAUTIFUL BATHROOM! 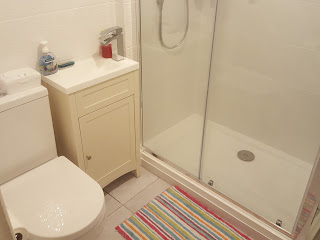 We picked a white Mosaic Tile as we thought it would add some texture and detail to the walls that plain white tiles and white grout wouldn't give us. 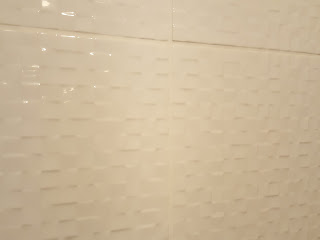 We picked a soft grey floor tile, which Mick fitted with grey grout to tone in even more. 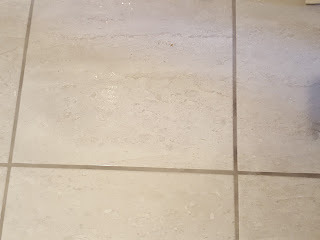 We picked a double width shower unit, which apparently has a special coating on the glass which makes it easier to clean. 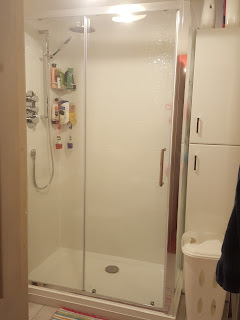 We picked a close couple toilet, with a soft close seat that means no more accidental slamming of the seat by Dan Jon! 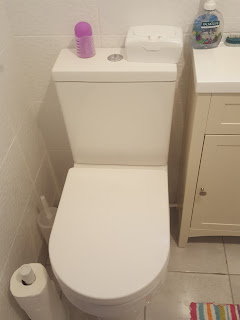 We picked a small sink, to give us more space in the bathroom overall, but with a fab mixer tap that gives a ribbon waterfall of water. Yes, I'm in love. 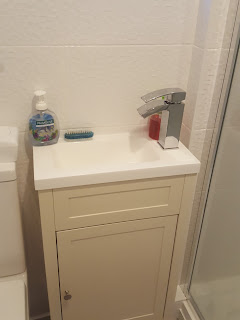 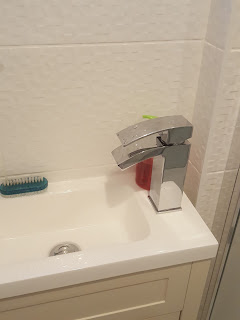 We picked a tall storage unit so that we could actually keep towels and spare toiletries in the bathroom rather than in the hallway. 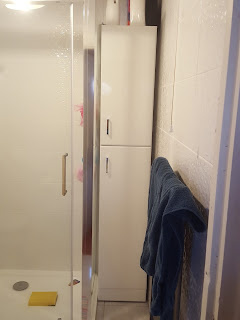 We picked a towel radiator to keep our towels and bathroom warm come the winter. 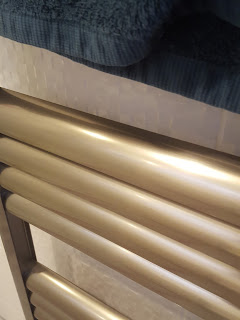 And then, we had picked a shower that was lovely. A nice microphone type shower head that was simple and practical and because of the savings I made on the other items in our bathroom I decided to splurge out a bit more, because I wanted my bathroom to be the sanctuary I had been dreaming of and I found a rainfall shower head with a microphone style shower head too. 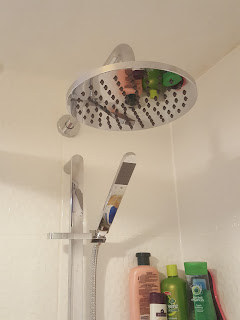 So, there you go. My bathroom is all new and clean and fresh and the only thing I have left to workout is what towels and shower mat I should get to compliment the bathroom!
DIY Family Life Home Improvements Making A House A Home