- September 11, 2017
Flyfour and I had headed out to B&Q one evening last week, to buy some needed DIY "stuff" and on the way back Flyfour suddenly remembered something that he had wanted to speak to me about, something that had apparently been troubling him for a few days.

"Is it possible, that you can get your morning alarm in line with mine?", he ventured. "You see, my alarm goes off at 6:25 and then yours goes off at 6:30 which interrupts my ten minute doze."

"Why don't you change your alarm? Make it go off at 6:20 and then my alarm at 6:30 will be the end of your dozing time and time for you to wake up. Or why don't you only have a five minute doze?" I replied. 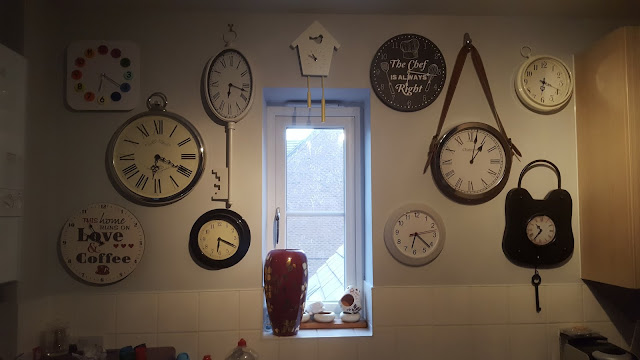 I got the raised eyebrow from Flyfour that lets me know that I have lost the argument. I don't actually see this look too often (mainly because I'm always right!) I knew however, before I had even spoken that I would change my alarm. Not because Flyfour was making me, but because as he is the one that actually goes to work outside of the home it doesn't matter if I wake up five minutes earlier, I could if I needed have a nap later that afternoon. Plus, I'm generally awake from around 5 am anyway, so it doesn't really matter what time my alarm goes off!

So I changed my alarm time.

It was when Flyfour came into the Kitchen to see me, that I used his line back on him.

"Is it possible, that you can get your morning alarm in line with mine?" I asked with just a tiny hint of sarcasm.

"I changed mine after capitulating last night, as your argument made it obvious to me that you weren't going to change yours. And then you did!"

We agreed that he would change his alarm back and I swear I only thought about changing my alarm back for a few seconds before deciding the amusement I'd garner from this trick wouldn't be worth the pain!
Family Life Funny