A Doughnut Bar Kind Of Evening

One of the ideas they had come up with was having a doughnut bar, which was a great idea as the girls LOVE doughnuts and adding tonnes of toppings and different flavour combos? Well, that's the sort of thing that we all love to do right? 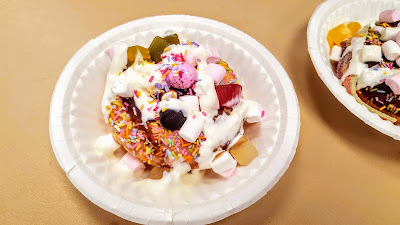 I decided that we had to make it a little more of a challenge for the girls however and so let them know that there was going to be a quiz, and they would be able to pick toppings based upon the number of points that they got from correctly answered questions. I didn't want the girls to be worried that they didn't know the answers to some of the questions, so I let them know that creative answers would also get points, and that flattery would definitely get them some extra points.

The quiz was based around some of the things that the girls had said they would like to learn in the future and I just wanted to get a rough gauge for where their experience was at, so we'd know what to focus on and to give those in the ward who would be leading the skill sessions some ideas too.

The girls worked together, jokingly argued together about the answers and learnt a couple of things too and then at the end of it, got to make their doughnut creations and eat them. Not even Top Ender wanted to pose for a photograph of her eating her creation for me, but I managed to get a sneaky capture! 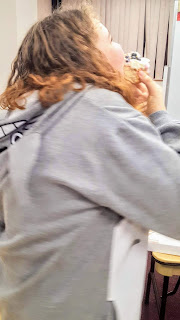 It was great fun and I think I may have to set a doughnut bar up at home in the very near future for the family to have some fun with!
Family Life Religion Treat Night